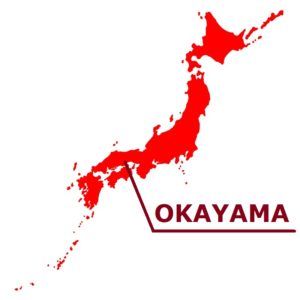 “Okayama-jo Castle” in Okayama City, Okayama Prefecture is a popular tourist attraction that you definitely want to visit if you visit Okayama Prefecture. It is characterized by a dark mastery which became the origin of another name “Ujo” (Crow Castle).
Although it suffered great damage in the air raid in World War II, it was rebuilt and remodeled many times throughout the Showa era, and now it is regaining its beautiful appearance at that time. Tsukimi-yagura turret and Nishite-yagura turret whose original appearances still remain are designated as an important cultural property of the country.
In 2006 it was designated as one of “Hundred Great Castles of Japan”. The current Okayama-jo castle can be said to be a popular tourist spot representing Okayama prefecture in reality as well as in name.
From the castle tower you can see a beautiful sight that overlooks Okayama city. The flow of “Asahikawa River” should be seen by the side, and “Korakuen Garden” should be seen north. There are no buildings higher than the castle tower around, so you will not be blocked by the spectacular 360 degree spread. You can see “Kin no Shachihoko” (golden dolphins : surmounting the roof of a castle-tower) at hand.
Okayama-jo castle is located a little away from JR Okayama station. Therefore, it would be better to change buses from the station. From “Okayama” station you can use “Okaden bus” or “Ryobi bus”. The bus stop called “Kencho-mae” (prefectural government office) is the nearest bus stop.
It is also possible to access by using a tram. Take the streetcar of “Okayama Electric Orbit” which is available from JR Okayama station and get off at the stop called “Okayama Castle / Okayama Korakuen-guchi”. If you use a tram, you can access it with 100 yen each way, which is quite profitable.
The tour fee of Okayama-jo Castle is 300 yen for over high school students and 120 yen for over primary school students. In addition, there are also common tickets with popular tourist spots in Okayama City such as Korakuen Garden, Hayashibara Art Museum, Orient Museum, etc. We can purchase considerably better than purchasing tickets separately, so if you plan to go to these sightseeing spots, let’s purchase a common ticket.

This castle called an alias “Ujo” (Crow Castle), and it is characterized by the structure that attached “Shitami-ita” (wooden board siding with battens) of the black lacquer coating to the wall of the castle tower suiting Sengoku busho (military commander of the Warring States period) tastes. And the gold leaf tile has decorated the roof.
In contrast the castle called “great castle” having been built after the Battle of Sekigahara, the Okayama-jo Castle leaves the old-fashioned structure to the present age among the castles built before the battle.

It is a 3-tiered, 6-story lookout-tower-type keep and the gold leaf tiles are covered on the roof. The golden grampuses and Oni-gawara (a type of roof ornamentation) have also been on the roof dignifiedly. This black and gold shows skillful contrast, and attracts those who visit here.

Burned down by the air raid in the World War

The first lord of the castle was Hideie UKITA who was one of the Gotairo of TOYOTOMI (Council of Five Elders of TOYOTOMI clan), and it is said that the castle was built in 1620. It is said that Tadao IKEDA of the fourth lord of the castle to have completed construction of the castle.
The Okayama-jo castle is burned down by the air raid in the World War in 1945, but this tsukimi-yagura turret (used for monitoring a castle entrance) remains unburnt, and has left the figure at the time of foundation. It is designated as the important cultural property of Japan.

The current castle tower was rebuilt in 1966.
There are the stand and the coffee shop in the first floor of this main tower, and the history of the castle is exhibited on the second floor to the fifth floor. The highest floor serves as a view place.

The lighting event is held during holidays

From sunset to 24:00, lighting up is performed through the year.
Moreover, during the sightseeing season such as consecutive holidays from the end of April to early May and August or November in Japan, the lighting event using chochin (paper lanterns) or toro (lanterns) is performed.