Kannon statue, said to be the most beautiful face in Japan

Sennyu-ji Temple, located in Higashiyama-ku, Kyoto, was built in 856 as the head temple of Shingen-shu Sennyu-ji school. Since the Edo period, successive emperors from Emperor Gomizunoo to Emperor Komei in the late Bakumatsu are buried in the tomb of the temple grounds. And, until the Japanese Constitution came into force, it was bodai-ji of imperial family. It is also called “Mitera Sennyu-ji Temple” because it was bodai-ji of the imperial family. There is “Tsuki no Wa no Misagi” (Moon circle tomb) in the precinct, and there are the tombs of the successive emperors. “Tsuki no Wa no Misagi” is still managed by the Imperial Household Agency. The temple holds documents designated as national treasures. Other than that, buildings, Buddha statues and scriptures are designated as important cultural properties. 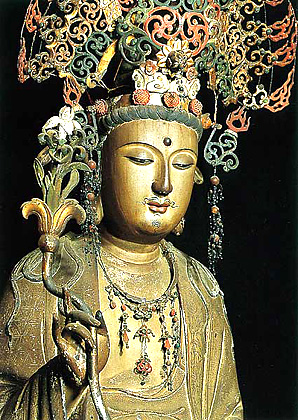 The highlight of the precinct is “Yokihi-Kannon-do (Empress Yang-Avalokitesvara Hall)”. Inside the temple, there is a statue of Kannon known as “the most beautiful face in Japan”. This statue of Kannon is also called “Yokihi-Kannon”. Yokihi-Kannon image is completely different from Japanese Buddha image and is a beautiful exotic Kannon image. It is a wooden structure, and it has “Hosoge”, which is said to be a paradise flower, on its right hand, and a Hosoge-Karakusa carved on its crown. Below that, there is a crown of Kannon. These decorations are considered to be made in China in a style not found in any of Japan’s Kannon statues.
Many women come to the “Yokihi-Kannon-do” to pray for the benefit of a beautiful woman. In front of Yokihi-Kannon-do, there is a cherry tree called “Yokihi cherry tree” and you can see beautiful flowers in spring.

Charms and Highlights of Sennyu-ji Temple

The sacred place of beauty and matchmaking

The Sennyu-ji Temple in Higashiyama-ku, Kyoto-shi is the Shingon sect Sennyu-ji group’s head temple. There are multiple Imperial mausoleums of the Emperor in the site and is called Mitera because it is a family temple of the Imperial Household. It is famous also for having deified the Yang-Kuei-fei Kannon besides “Sanze-Butsu” (Shaka Nyorai, Amida Nyorai and Miroku Nyorai) of the principal image. It is said that the Yang-Kuei-fei Kannon has divine favor, such as beauty prayer and a good match, and gains popularity recently as the sacred place of beauty and matchmaking.

The precincts of Sennyu-ji Temple with the long history have abundant trees. A cherry tree in spring and brilliant autumnal leaves in autumn are proud of their beauty.
The autumnal leaves of the Sennyu-ji Temple is one of the “Sixty-six Sceneries of Kyoto’s Colored Leaves” as well as the Tofuku-ji Temple in the neighborhood. In the spring, not only Someiyoshino but also Shidarezakura and double cherry-blossoms bloom beautifully. The flower can be enjoyed till the middle of April and it is the popular cherry-blossom-viewing spot from not only the tourist but also the local people.

The Gozasho Teien (garden of imperial office room) is the small garden made from the southeast of Gozasho to the south side of the palace. The contrast of moss and white sand is brilliant and the tasteful stone lantern is put on the ridge of the pond. Many trees and flowers are also planted and it is the garden which can see the different beauty seasonally.

The temple is continuing prospering till the present

The Sennyu-ji Temple prospered very much as a family temple of the Imperial Household even after it was the Edo era. In the Meiji era, the Imperial mausoleum of the Emperor no longer has been built, but the temple is continuing prospering till the present, without people’s faith declining.