“Shoro Nagashi Festival” (Spirit Boat Procession) which is the typical summer of Nagasaki Prefecture in the third week of August is done to mourn the spirit of the deceased. Generally speaking, “Bon” is said to be the period to welcome and hold a religious service for the spirits of our ancestors and relatives, but there are differences in how to provide such services in Nagasaki Prefecture.
In Nagasaki, it is regarded as a period of hospitality honoring the spirit who comes back from the Pure Land once a year. So, during the Bon period, the city will be wrapped in a lively mood, such as using a firecracker or launching fireworks. It is said that the culture unique to Nagasaki that welcomes the ancestors and relatives, the soul of a close friend, is derived from Chinese culture.
At the first obon following the death of a family member (hatsubon) the surviving family members tow boats called shorobune, which are decorated with bon-lanterns and imitation flowers and are believed to hold the spirits of the deceased on board, to a place called the nagashiba. There is a meaning to put the soul of the deceased on shorobune and send it to the paradise by delivering it to nagashiba.
It is said that Shoro Nagashi comes from “Saishu Nagashi” which is an event held in China. In Shoro Nagashi, shorobune boats were passed on to the sea as a culture, but now it is forbidden to sail to the sea.
The highlight of Shoro Nagashi is the appearance of shorobune boats that makes you feel the thought of the deceased. There is also a ornate shorobune boats that is different from the image of “ship used for mourning”, and from the beautiful appearance you can feel the feeling that the bereaved family thinks of the deceased.
On the day of Shoro Nagashi, traffic in the city is regulated, so it may be difficult to travel by car. On the day, if you are going to access Nagasaki city, you should use the train. In order to access the Nagasaki prefectural government office which is easy to appreciate shorobune boats, it is convenient to get off at “Ohato station” by train.
Shoro Nagashi will be held in a lively atmosphere such as the use of firecrackers, but it is an event to mourn the soul of the deceased and it is different from the general festival. Let’s not forget the feelings of consideration to people who are pulling shorobune boats.

Not considered in other areas occurring in Nagasaki

It is said that the soul of the late person comes back to the descendant at the Bon Festival in Japan, there are manners and customs to worship the ancestral spirit of a dead person.
It seems to be the nationally customs of Bon Festival that on the August 13th, small fires called mukaebi (literally welcoming fire), are lit outside houses to welcome the spirits of the deceased into the home, and on the August 16th, fires called okuribi (literally sending off fire) are lit outside homes to see the spirits off on their journey back to the afterlife, but the way varies by a district.
It is famous for the customs which are not considered in other areas occurring in Nagasaki. 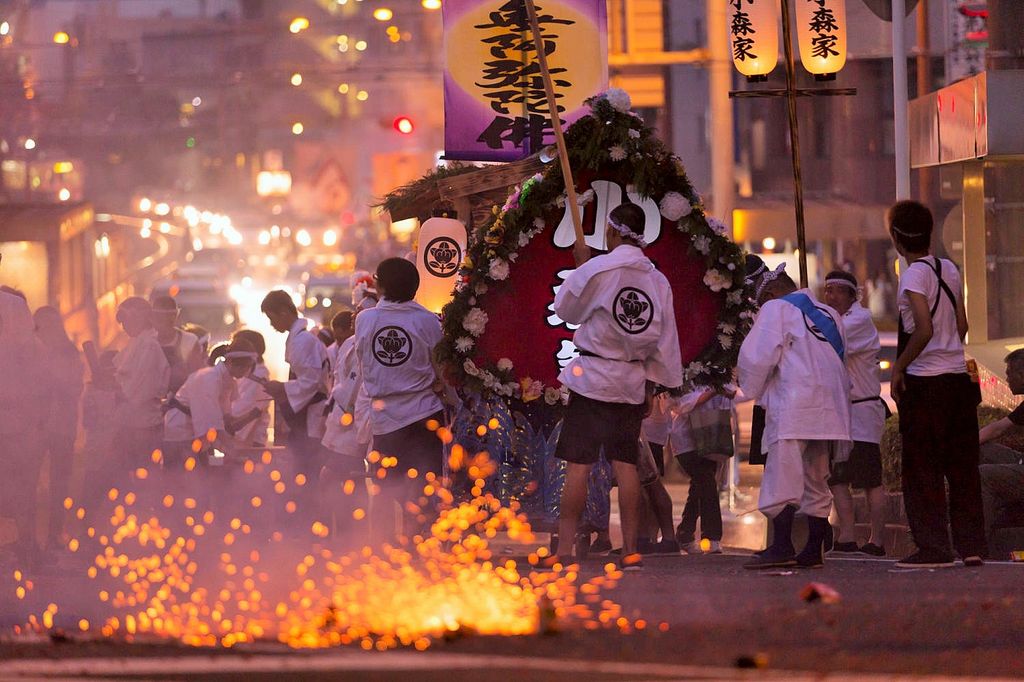 The very noisy festival not a silent solemn

Speaking of the summer feature of Nagasaki is Shoro Nagashi performed on August 15 every year. Shoro Nagashi of Nagasaki is the event which is like the very noisy festival not a silent solemn.
It produces “Shoro Sen” (Ship) every each family or town and parades around the city for several hours and drains it into the sea.

Cannot be without an earplug near there

The features of Shoro Nagashi of Nagasaki, The best thing of all fireworks are amazing. In particular, the consumption of the firecracker is tremendous, and an explosion resounds in the city from the evening. Therefore, all the coming and going people cannot be without an earplug near there. The consumption of fireworks is large quantity, too. It is the day which probably firecracker are most consumed in Japan.

The firecrackers of 1 million yen or more

The size of “Shoro Sen” (Ship) varies, but the big thing is around 10 meters among that. When the amount is large, the firecrackers of 1 million yen or more quantity are did during a trip until it pours a ship to the sea.

Shoro Nagashi is one of “the farewelling spirits bonfire”. Okuri-bi is a fire lit to send the ancestor’s spirit back to their grave. And originally these are not a “festival” but “events.” It is a Buddhism event in which a memorial service is held for the deceased.