Summer festival, while cherishing the tradition of “Sacred Place Matsushima”

Matsushima has long been known for its beauty since ancient times in Heian, and is now designated as a National Scenic Spot and Prefectural Natural Park. Many visitors to the area were so admired of their beauty that they praised them for painting and poetry.
The views from the four observatories, east, west, north and south, are called “Shidaikan”, and each will delight in the different beauty of the scenery. The color contrast of the green pine and the sculptural beauty created by the small islands floating in the wide sea are kept in an exquisite balance. The beauty remains the same no matter where you look.

Matsushima, a sacred place in the Tohoku region, started the “Matsushima-Ryutoe Umi no Bon” in 2011 after the Great East Japan Earthquake, considering requiem and memorial service. This is a new summer festival created by everyone, while cherishing the tradition of “Sacred Place Matsushima” and the temple town culture.

Charms and Highlights of “Matsushima-Ryutoe Umi no Bon”

Festival that both adults and children will smile naturally

In Matsushima which is a Tohoku sacred place, “Matsushima-Ryutoe Umi no Bon” was started for 2011 in the year of the Great East Japan Earthquake, for the purpose of praying and serving. As a new summer festival that replaces the “Matsushima fireworks display” so far, it is held every year since 2011 immediately after the earthquake. Illuminated lanterns, Bon Odori and drum performance are held at the venue with lanterns and bonfires, and approximately 1,200 lanterns are floated in Matsushima Bay. Also, at the end of the festival, fireworks are also launched and large fireworks illuminate the night sky of Matsushima.

The coastal area of Miyagi prefecture suffered catastrophic damage in the 2011 earthquake disaster. In Matsushima Town, one of Japan’s three scenic spots, a summer festival of soul and sacrifice was started from this year according to the time of the Bon festival. The origin of this festival is “Osegakie” (‘hungry ghosts’ feeding rites’) which has been on the famous Zuiganji Temple for 700 years.
On the evening of the 16th we burn Kyogitoba on the Matsushima coast and 50 monks perform Hoyo (annual memorial service). On the 15th, various events such as Bon Odori and drum performance as eve of festival will be held, and both fireworks and fireworks will be launched on both days. “Matsushima – Ryutoe Umi no Bon” is a summer festival that enjoys the vibrancy of summer festivities while cherishing memorial service as a sacred place.
It is a festival that cherishes the tradition of ‘Zuiganji Temple Osegakie’ which lasts for 700 years, and shares the hometown’s summer which is rooted in landscape, history, Teramachi culture.
It is also a festival where both adults and children will smile naturally.

The new summer festival which the young volunteers of Matsushima-cho, Miyagi made up is “Matsushima Ryutoe Umi no Bon Festival.”
“Umi No Bon Festival” started in 2011 when the Great East Japan Earthquake happened.
In Matsushima where the earthquake disaster was damaged, the sightseeing events which carried out till then were canceled. So, local people gathered, everybody’s power was united and the festival of this area was revived for the first time in 30 years.

Around the national treasure Zuigan-ji

“Umi No Bon Festival” is performed in the whole area around the national treasure Zuigan-ji which Matsushima is proud of.
It is also the feature of this festival that the event performed newly harmonizes with the event from handed-down convention.
The large Bon festival is held on August 15, and “Osekigae” which is a traditional event to have the history with more than of 700 years is performed on 16th.
The event “Osekigae” in which 50 priests of Zuigan-ji burn sotoba (pagoda), and chant the sutras in the open space where the tower was constructed. 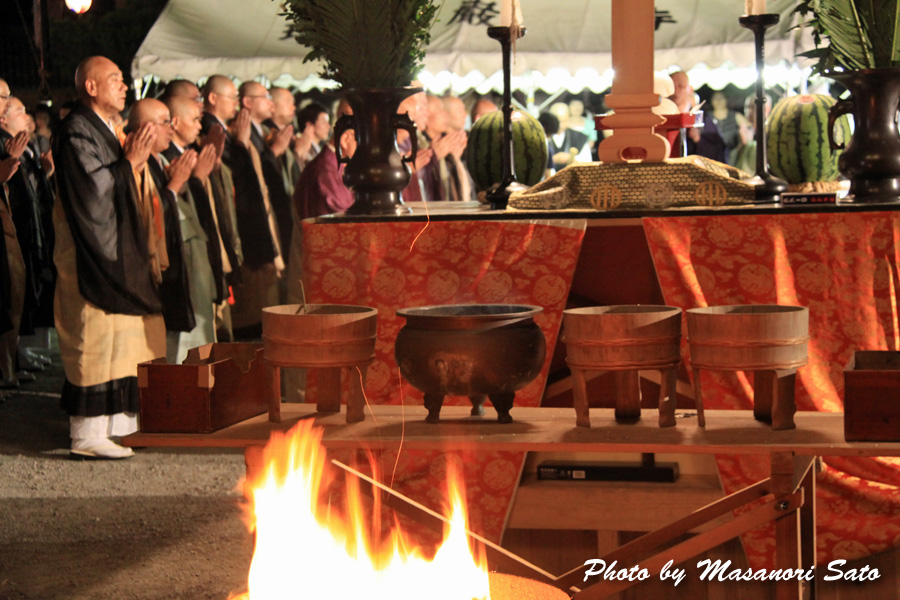 In addition, various events are carried out like floating of lanterns and “the light way of all”, which the children of Matsushima made, and “toy fireworks open spaces”.

Moreover, not only a festival but the workshop “the making of a spirit-of-a-departed-person horse” which a local old person teaches to children is held.
At the time of the ancestor to meet, since he would like to meet them early, it is a cucumber horse of a swift-running.
At the time of a send-off, since separation with the ancestor is memorable, it is a eggplant cow of a slow-moving.
Children learn the meaning of the Bon Festival while hearing such an old manners and customs.

These actions were evaluated, and “Umi No Bon Festival” won the good design prize in 2012.