Many Japanese people think of the “Danjiri Festival” when they hear that it is a festival in Kansai. Speaking of the Danjiri Festival, the highlights are “Yarimawashi” (turn-around), which changes the direction of Danjiri, and elaborate sculptures carved into Danjiri. Every year, many fans come from all over the country to see the great power.
The Danjiri Festival is a shinto ritual that runs a festival car called “Danjiri” in the Kansai region. The famous Kishiwada Danjiri Festival is held in the fall, but the Kobe area is spring, the Osaka city is summer, and the festival season varies depending on the region.
There are many points that the Danjiri Festival attracts people, but the power and speed of “Turning” that changes the direction of Danjiri 90 degrees while running is the biggest attraction.
Danjiri itself is also engraved with historical events and stories that are famous for Kabuki, Ningyo Joruri, and Kodan. One of the attractions is that you can see this carving up close. You can’t see the details when the danji is moving, but the beauty of the carvings that appear at the moment they stop is a masterpiece. Since each sculpture is different, you can feel the goodness of each sculpture by comparing many sculptures.
You shouldn’t miss the “Kishiwada Danjiri Festival” when talking about the Danjiri Festival. The Kishiwada Danjiri Festival, held twice in September and October, is a representative of the Danjiri Festival in both name and reality.
It is said that the Kishiwada Danjiri Festival was started in 1703, when Nagayasu OKABE, who was then the Lord of Kishiwada, solicited Kyoto Fushimi Inari for the Sannomaru Castle and prayed for the good harvest of rice.
At festivals at that time, after performing arts such as an improvised drama and kyogen, it was said that worshiping was conducted at Sannomaru Shrine and Kishiki Shrine. Nowadays, the social structure has changed, and it has changed from a festival that prays for good harvest as it used to be, but the fundamental spirit of community ties has been passed on.
Kishiwada Danjiri’s highlight is “Yarimawashi”. It runs around Danjiri, which weighs 4 tons, and runs around the designated course many times without losing momentum.
The overwhelming speed and power cannot be seen elsewhere. Each individual participating in the festival has a role in drawing, and it is most important that everyone is in time. The strength of cooperation between towns will be transmitted.
Kishiwada Danjiri Festival is attractive because of its braveness and power, but it also involves danger. You must act according to the instructions of the festivities and police officers. Also, when taking photos, keep away from drawing Danjiri.

In the festival, things that “Mikoshi” (portable shrine) wrapped in rough heat such as “Tsukiawase” (Matching), “Suriawase” (Rubbing), “Yosekatsugi” (Carrying) are called “fight festival”. As for the fighting festival, of course, the famous “Kakunodate-matsuri Festival float parade” to be held in September in Akita Prefecture, “Iizaka Fight Festival” to be held in Iizaka, Fukushima Prefecture in October is of course famous, but the “Danjiri Festival” to be held in Osaka Kishiwada district is the best with its vigorous quality.

It is the best highlight that dashi (float) and yatai (festival float) change their direction at a corner in festivals throughout the country, with dashi and yatai as the center of the festival. For example, the Gion Festival in Kyoto will perform “Tsuji-mawashi” (a shift of direction) which puts cracked bamboo and slides under the wheel. In addition, Dashi of Hida Takayama Festival uses the fifth wheel “Modoshi-guruma” to turn the corner.
However, danjiri (festival float) in Kishiwada does not turn around at a corner like other Dashi, but instead turns at right angles while running with vigor. Although it seems to be easy, it is not easy to operate while running with a festival float exceeding 4 tons in weight. During the two days of the festival, danjiri runs around the defined drawing route for many laps and laps, and then performs “Yarimawashi” (changing the direction of danjiri at the corner) for each corner. There is nothing that exceeds Danjiri Festival of Kishiwada in its power and speed.

The Danjiri Festival at Kishiwada City, Osaka known as its heroicness.
It is held on the day before of “Respect‐for‐the‐Aged Day” (3rd Monday of September) and the two days before of it, and more than 400,000 people visit there every year.

Danjiri refers to a float dedicated to the deity in a festival. The beginning the Danjiri Festival of Kishiwada is approximately 300 years ago. It is said that the origin of it is an event to pray for a huge harvest by Kishiwada feudal lord at that time. 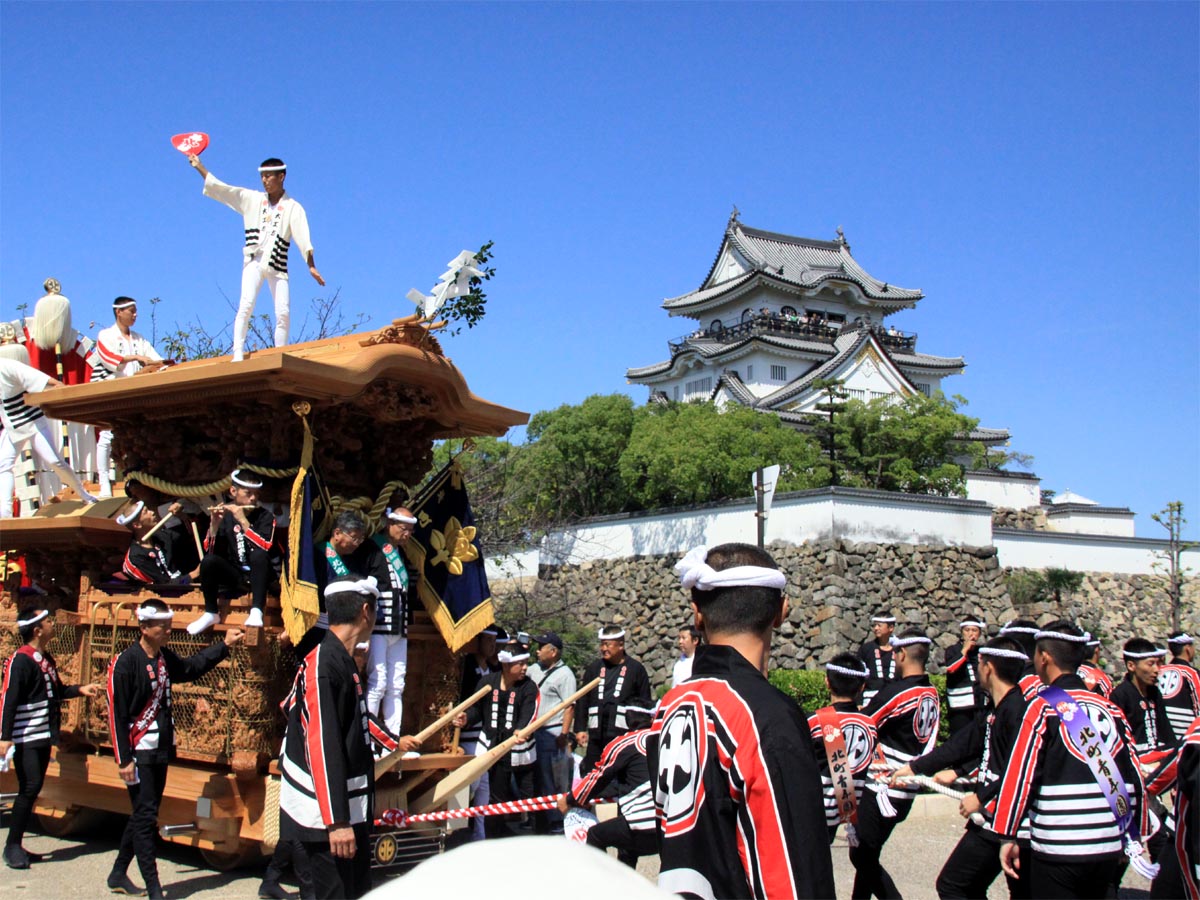 It is held twice on September and October. Kishiwada-city is divided in some districts. The festival is performed in the hilly section in September, and the shore section in October. Both of which section collectively called The Kishiwada Danjiri Festival.

It is a wild festival as the festival-car run about in the city. A point worthy of this festival is changing the direction of danjiri at the corner called ‘yarimawashi.’ The style of its performance is daring such as changing direction of several tons of the Danjiri in a right angle. You can feel the aura of ‘yarimawashi’ that matching power with mind, and showing the traditional skill and courage by more than 200 players of pulling floating-car.