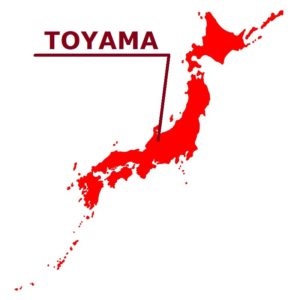 The “Fukuno Yotaka Festival” is a festival held in Nanto City, Toyama Prefecture from May 1st to 2nd every year. Nanto City Fukuno is located in the southeastern part of Toyama Prefecture, about 20 km south of Takaoka City, and has a population of about 14,000.
The Fukuno Yotaka Festival is one of the oldest festivals in Toyama Prefecture, which has a tradition of over 350 years. It is said to be the oldest of the Yotaka Festivals in nearby Tonami and Nanto cities.
The main event of Yotaka Festival is “Paper-Shade lamp Festival” held at night. The Fukuno Yotaka Festival is a festival that whirls the “Paper-Shade lamp Festival Float”. So don’t go to see it in the daytime. Rather than during the day, the night is recommended, and the festival itself is not held during the day. On the second day, at around 18:00 when the sun goes down, the festival floats will finally gather from all over the place and will begin to show excitement.
Seven big paper-shade lamps will travel around the city from 6:00 pm, and will begin to gather around the common name “Ginko Yotsukado” around 9 pm. At the venue, young people will liven up with Ohayashi (Japanese orchestra) and drums.
In particular, “Hikiai” (fighting festival) held at midnight on the second day is the biggest attraction.

Along with Yodaka paper-shade lamp float, the Yodaka taiko and wooden clapper sing the Yodaka song and work around the town. From around 23:00 on the second day, a rough “Hikiai” will be held, and a paper-shade lamp float will move as if it matches the rhythm of a dignified wooden clapper while many visitors watch it. Young people wearing Happi dance like shadows on a flaming lamp float and break when they pass each other.
Whenever two big paper-shade lamp floats pass each other, young people jump into the opponent’s floats and destroy them. At the Yotaka Festival held in other neighboring areas, the decorations in front of the lamp shade floats are broken, but in Fukuno, the lamp shade floats themselves are destroyed. It’s very rough and the police officers who are guards wear helmets.

Introducing access to Fukuno, Nanto City, Toyama Prefecture, where the “Fukuno Yotaka Festival” will be held. Take the Japan Railway Hokuriku Shinkansen from Tokyo Station, transfer to the Johana Line at “Shin Takaoka” Station, and get off at “Fukuno” Station.

Fukuno Yotaka Matsuri Festival held every year in the Fukuno area of ​​Nanto City, Toyama Prefecture is a festival held as a spring festival of Fukuno Shinmeisha Shrine. The festival of about 370 years tradition boasts a parade of glossy andon (paper-enclosed lantern) and a fight called large andon’s “Hikiai” which is held from around 2 o’clock on the 2nd. Big andon, as high as 6.5 meters, and large and small 20 andon, parade the night city with a brave cheer of young people. The enthusiasm of “Hikiai” performed when big andon passes each other at the end of the festival and the beauty of andon illuminating the spring night are magnificent. In addition, this festival is registered as a “Future Heritage” from the Federation of UNESCO Associations of Japan as a “festival to be left for children after 100 years”.

Fukuno Yotaka Matsuri Festival is held every two days on May 1st and 2nd every year. The main event begins around 18:30 which is the time zone when the andons are lit up. Also on May 3, as Fukuno Shinmeisha Shrine’s festival, “Hikiyama-Junko” (a float dragged by people) and Mikoshi togyo (parade of mikoshi-portable shrines, and priests for the divine spirits in the portable shrine moving to other places from the main shrine) will be held.
The origin of the Fukuno Yotaka Matsuri Festival which continues from the middle of the Edo period goes back to the time when the town was built in 1650. Immediately after the town was built, in 1652 a big fire was hit and all houses were destroyed. People who wish for the reconstruction of the town have sent representatives to the Ise-Jingu shrine to visit the shrine to greet the guardian deity in the town. People in the town who heard that the representative come back from visiting after the sunset came and greeted him with their andon in hand. This is said to be the beginning of Fukuno Yotaka Matsuri Festival. When this festival began, handy andon was used, but eventually it changed to an elegant one, it got more luxurious and bigger and it seems that it became a festival like now.

The date for the “Yotaka Matsuri” (Yotaka Festival) of the central city area of the Fukuno are from 1 – 3 May every year.
In 1652, it is considered to be an origin of this event that the people of the town turn on an Andon (a paper-covered lantern), and to welcome the souls of the divided spirit of Ise Grand Shrie to the Fukuno Shrine.

The traditions of 350 years

The Fukuno Yotaka Matsuri (The Fukuno Night Festival) held on May is a festival with the traditions of 350 years.

The large Andon of 14m in height parade through the town with a shout of “Yoiyasa!, Yoiyasa!”, and that heap up everyone’s feeling.

Young people ,who are all uniformly dressed happi of each area, vigorously parades through the town with the Andon of 20 several in big things and small things including seven large Andon of 7m in height.

The battle of each Andon that is biggest highlight of the festival begins at about 23:00 of 2nd day. With energetic sound of wooden clappers, the young people breaks the Andon each other. The intense fight is so powerful that the audiences become glued to it.