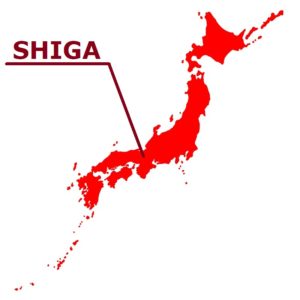 Omihachiman City, Shiga Prefecture, which is close to Lake Biwa, has a long history of idyllic satoyama landscapes, including water sports. On the other hand, it is a place where the townscape which has developed independently as the Omi merchant birthplace is left. You can enjoy the scenery of “Hachimanbori Canal”, which is a place of rich nature and the place of people’s life, with a rowing boat or an engine boat.
Before, there were many “Naiko” (inner lake) around Lake Biwa. “Naiko” is the water area around Lake Biwa, and the waterways were stretched, and it was possible to freely return to and from Lake Biwa. More than 40 inner lakes were listed in the Meiji period, but many of these disappeared by the reclamation project, and now the paddy fields are spreading.
Under these circumstances, Lake Nishinoko of Omi-Hachiman City, which has remained to this day, is the largest in the existing inner lake, and now forms a water sports area that is rare in the country.
“Hachimanbori” is an artificial water channel created to connect Lake Biwa and the city area during the Azuchi Momoyama period. This water transport increased the traffic of ships and people, and developed commerce, which gave birth to the famous Omi merchant nationwide.
“Hachimanbori Canal Tour” will travel approximately 5 kilometers in 35 minutes. It starts from the boarding place which is a 1-minute walk from “Kawara Museum” which stands along Hachimanbori. The boat of “Hachimanbori Canal Tour” has a capacity of 11 people. It may be crowded from spring to autumn, so it is a good idea to reserve in advance.
“Hachimanbori” flourished as a place of people’s life and a place of interaction. From the moat you can see the Himure Hachimangu Shrine and the old house. In addition, you can enjoy different scenery depending on the season, such as cherry blossoms in spring, willows in summer, autumn leaves in autumn, and snow landscapes in winter
The announcements on the ship introduce you to the history of Omi Hachiman. It may be good to imagine the life at the time while looking at the scenery.
Every year in the Hachimanbori, the Hachimanbori Festival is held, and the waterways are illuminated with approximately 3,000 lights. You can enjoy the appearance different from daytime, such as special exhibitions and Stamp collecting that are limited at this time.

Located on the east bank of Lake Biwa, Shiga Prefecture, Omihachiman City prospered as a castle town built by Hidetsugu TOYOTOMI and developed as a business town where “Omi shonin” (Omi merchants) goes and leaves. It is a famous sightseeing spot in Hachiman-bori Canal and “Suigo meguri” (tour around Riverside District tour), there are many historical sites, there are still many places of interest as old good scenery still remains. Historic cultural town, Omihachiman. There are many valuable buildings ranging from shrines and temples with historical background to buildings that represent Omi.
Actually Omihachiman City has many spots derived from historical figures. When “Suigo meguri”, listen to the story of Sendo (waterman) along with its history, you will see a drama of history you did not know. In the Warring States Period, Nobunaga and Hideyoshi (Japanese Military Commanders) crawled around the castle town Omihachiman City is a city with plenty of charm, such as quaint merchants house and delicious sweets that have developed as offerings.
Hachiman-bori Canal is a waterway 6 kilometers long from Lake Biwa. Once used to carry goods, it was an essential waterway for business, but now there is also a promenade, which is a walking path. It is a tasteful moat with beautiful waterside and the old Dozo (rice storage).

The moat plays a role as the defense, and the canal links Lake Biwa

Hidetsugu Toyotomi, who was a nephew of Hideyoshi Toyotomi had constructed the Hachiman-jo (castle) in 1585, and it was beginning of this city. The moat around the castle plays a role as the defense, and as the canal which links Lake Biwa.

You can experience “the Suigo-meguri” that can enjoy the riverside district that is full of nature by a pleasure boat. You can chose a engine boat, a hand rowing boat.

In fact, Omihachiman-shi has a lot of spots originating in historical persons. If it listens to the captain’s talk by the tour around a riverside area, the drama of the history which was not known can be seen. Castle town Omihachiman where Nobunaga and Hideyoshi ran about in the Age of Civil Wars is a charm full of towns, such as delicious sweets which have developed as a merchant’s family and a gift. How about visiting a certain vigor Omihachiman-shi as a town of the business?