The beauty of light and snow in the white snow statue 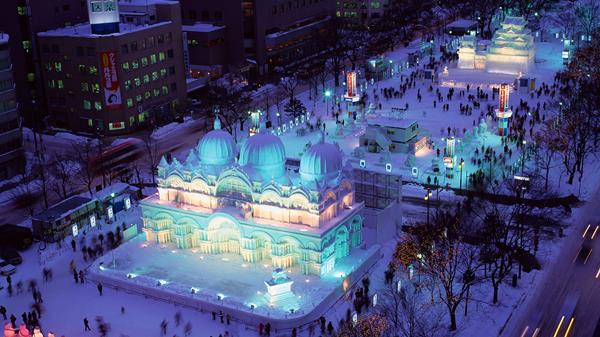 Now, after enjoying the daytime Big Snow Statue, let’s enjoy the night light up. Light up is from dusk until 22:00. Sapporo at this time will be dark at around 16:00. It’s best to see it getting darker and lighted up.
The view from the Sapporo TV Tower, a symbol of Sapporo Odori Park, is also a must-see. The view from the west to the snow festival venue is wonderful. It is one of the best sights of the Sapporo Snow Festival, with a skating rink located directly below, numerous snow statues and road illuminations in the back.
Projection mapping that became a hot topic by projecting images on a lighted up snow statue. It has been held since 2013, and it was so popular that it was so crowded that some were canceled. In 2014, the venue was increased to three locations. The beauty of the light and snow in the white snow statue is a must-see.
Now, in addition to the main “Odori venue” where the Big Snow Statue is located, Susukino, the third venue, is called “Ice Festival”, and large and small ice sculptures line up in the middle of Hokkaido’s largest entertainment district. And the highlight of this venue is at night. Transparent sculpture shines the light of Hokkaido’s largest neon street, and you can enjoy fantastic beauty. In addition, unique sculptures such as delicious crabs that have been pickled in ice will soften the cold night.

“Sapporo Snow Festival” which began in 1950 and reached the 69th time in 2018 is one of the longest history and the largest scale event in Hokkaido. To this end, not only domestic but also many foreign tourists visit, the number exceeds 2.5 million each year.

This event started in 1950 when local junior high and high school students made 6 snow statues in Odori Park. At that time, snowball fight, snow statue exhibition, carnival etc were held, and as more than 50 thousand visitors gathered than expected, it was established as a winter event in Sapporo. In 1953, a 15-meter high snow statue was created, and in 1955 the Japan Self-Defense Forces participated and large-scale snow statues were made. In addition, the Sapporo Snow Festival became known to the world with the 1972 Winter Sapporo Olympics as a trigger.
In the Snow Festival, in addition to attracting the power and beauty of the big snow statues, recently it has shown new fascination and excitement such as “Projection mapping” which is produced fantastically and many events.
The Snow Festival is held at the Odori venue where big snow statues are overwhelmed by sizes and craftsmanship, Tsudome venue with abundant snow activities, and Susukino venue where beautiful ice sculpture shines on neon. Let’s touch the “culture of Hokkaido enjoying snow and harsh coldness” at three venues with varied individuality.

It is said that the origin of this event is school children in Sapporo-city made six snow statues at main street that was a snow dumping place in the time of 1950. The large snow statues which is now synonymous with the Sapporo Snow Festival was made for the first time in 1953.

The event area consisting 3 places, and each area has totally different concepts, so visitor can enjoy them without losing interest.

The Odori-area is the main site of this event. There are large and small various snow statues along the Odori Park which length is more than 1.5 km, and you can see them while walking.
And there are the works by participant of citizen, the large snow statue which made by supported company, and the works for the international snow statue contest.

The Tsudomu-area is the second site of it. This area is an experience-based place that can be enjoyed by young and old ,like the long slide which made of snow, the “Snow Rafting” pulling a rafting board by snowmobile, etc.

It is the Susukino-area that sculptures of the ice is mainly displayed. It was slightly different from the other two areas, you can enjoy the unique atmosphere characteristic of the Susukino-area.