Asakusa Shrine, right next to the main shrine of Sensoji Temple, is a shrine that is popularly known as Sanja-sama. Hinokuma Hamanari, Hinokuma Takenari, and Hajinoatai Nakatomo are enshrined.
Asakusa Shrine has a history of over 1,000 years, just like Sensoji Temple, and is full of highlights such as stone monuments, the Main Shrine Building and Goshuin.
The Sanja Festival, held for three days in May every year, is also said to be a “downtown feature” where Asakusa comes to life. Asakusa Shrine is a shrine next to the main hall of Sensoji Temple in Taito-ku, Tokyo. The three people who were involved in the founding of Sensoji Temple are festival gods, so they are popularly known as Sanja.
The shrine currently left on the precincts was built in 1649 with the donation of Tokugawa Iemitsu. In 1951, Worship Hall (Haiden), Votive Offering Hall (Heiden), and Main Shrine Building (Honden) are designated as important cultural properties.
During the Edict for Separation of Shinto and Buddhism issued by the Meiji government, it was named Sanja Myojin Shrine, and six years later it became the current “Asakusa Shrine”.

The “Sanja Festival” held mainly by Ujiko (Shrine Parishner) at Asakusa Shrine is an event that attracts attention from both domestic and foreign tourists. “Mikoshi Togyo” travels around the city every year on the third Friday, Saturday and Sunday of May. “Mikoshi Togyo” refers to a Shinto ritual where a mikoshi (portable shrine) parades to pray for happiness of people lining the path of the parade. During the Sanja Festival, one of the most famous festivals in Tokyo, Asakusa is the most lively part of the year.
On the first day of the festival, a large procession walks through the city, and the “Shinto Ritual Binzasara Dance” designated as an intangible cultural asset in Tokyo. The appearance of the people carrying the sacred body or the Holy Spirit around the city is overwhelming.
The biggest attraction is the “Mikoshi Union Togyo with Neighbours” on the third day, when more than 100 mikoshi go around the city.

The popular “Asakusa Sanja Matsuri Festival”, which is famous as a very brave and exciting mikoshi, is held every 3rd Friday, Saturday and Sunday in the third week of May in Asakusa. The number of Mikoshi (portable shrine) is about 100 which combined the thing of Asakusa Shrine and things in the town, and walks around the town of Asakusa full of lively dynamism, with a cheeky voice of people carrying them. They are powerful. It is loved by many people as a traditional Japanese festival, but year by year, tourists are also increasing from foreign countries.

“Sanja Matsuri” is a common name, the official name is Asakusa Jinja Shrine Rei-taisai (regular rites and festivals). Hinokuma Hamanari, Hinokuma Takenari, and Hajinoatai Nakatomo are enshrined as gods, they are called “Sanja” (Three Gods). It is one of Dengaku (ritual music and dancing in shrines and temples) that continues from the Heian period, a festival dancing hoping for Gokokuhojo (bumper crop) and thriving business. This dance is called “Pinzasara Dance”, and it is designated as an intangible cultural property of Tokyo. “Pinzasara Dance” can only be seen at the Asakusa Sanja Matsuri Festival.
Another attraction is “Mikoshi togyo”. “Togyo” means that Mikoshi on which God got on moves. About 100 Mikoshi of Ujiko (Shrine Parishner) of Asakusa Jinja Shrine will gather at the back square. One by one will be refueled in the precincts of Asakusha Jinja Shrine and go around the town in Asakusa. Both adults and children carry Mikoshi. Mikoshi, there is a history in each and its braveness remains in the impression.
As much as 100 Mikoshi visiting the town will be reassured and fun whenever you see it. Please do not miss it for traditional Mikoshi traditional arts. Surely a nice summer will come.

Speaking of the festival which tells the visit of summer of Tokyo, the annual festival “Sanja Matsuri Festival” of Asakusa-jinja is famous. It is performed every year on Friday and Saturday, Sunday of May. There is the crowd of 1,500,000 people only in the holding period. Anyway, Sanja Matsuri Festival is great force. The state of the getting out the Mikoshi shrine (miniature shrine) is overwhelmed.

It is a festival of Asakusa Jinja Shrine

Friday of the first day, the popular great parades as Hayashi-Yatai (festival car), Kashira-Kiyari (festival song),Binzasara-Mai (festival dance),Shirasagi-no-Mai (festival dance) is held around the town of Asakusa.
On Saturday of the second day, 88 Mikoshis of 44 towns which gathered in the open space depart one set at a time, and, receive great purification in Asakusa Jinja Shrine and flock to each neighborhood.

This day is the biggest main event

And Sunday of the last day, Miyadashi, Honsha-Mikoshi Togyo (the head office Mikoshi leaving one after another to each town), and Miyairi. Miyadashi refers to taking the portable shrine outside the shrine’s premises, and Miyairi refers to the entry of the portable shrine into the shrine’s premises after the visits.
This day becomes the biggest main event of Sanja Matsur Festival.

It is called “a wild festival”

The force of Honsha-Mikoshi Togyo of the final day is awful. Because of its excessive heat and intensity, it is called “a wild festival”. 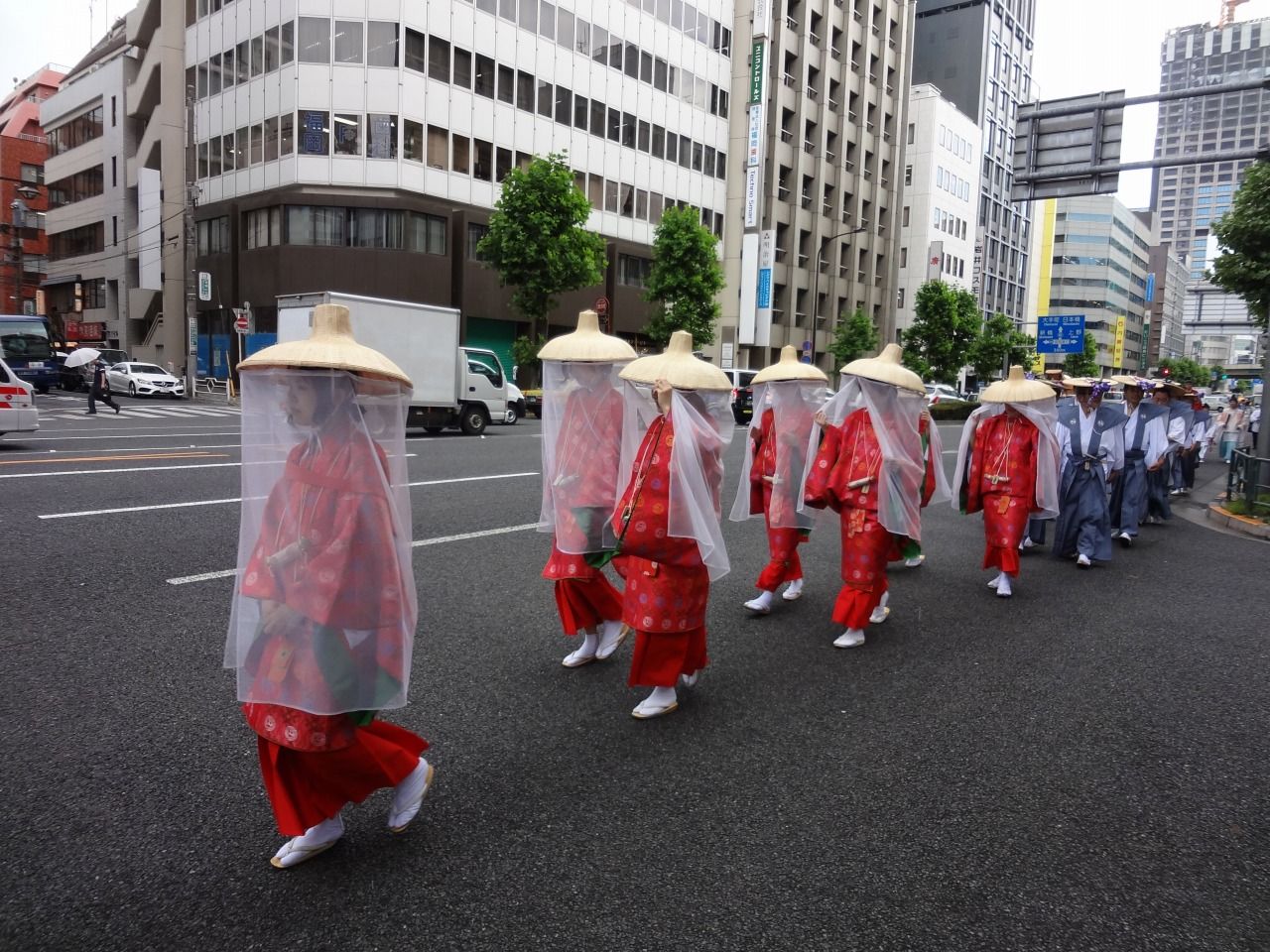