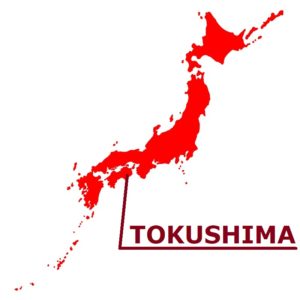 Awa Odori Dance is a Bon festival dance that originated in Tokushima Prefecture with over 400 years of history. A group of dancers called “Ren” dances to the rhythm of the double beat. The Awa Odori Dance Festival will be held all over the country, but the “Awa Odori Dance Festival” held in Tokushima City is one of the largest in the country.
About 100,000 dancers will make the town look like a big picture scroll, and it will be full of dance in the buzzing voice and rhythmic festival music.
It is a summer festival of Tokushima, which is visited by about 1.35 million tourists from home and abroad.
Awa Odori Dance will be held at the center of Tokushima city every year for 4 days from August 12th to 15th, “Selected Awa Odori Festival” at noon and “Awa Odori Main Festival” at night. On August 11th, the day before the Main Festival, the “Selected Awa Odori competition eve” will be held at Asty Tokushima.
“Famous Ren” which shows the outstanding dance in the dancer group called “Ren”. Awa Odori does not have a specific type, so you can enjoy the difference in individuality from Ren to Ren. The dance of famous Ren such as “Aho Ren”, “Gojahei”, “Nonki Ren” is a must see!
“Man dance” which attracts the audience by light and vigorous dance. There are “Yukata Dance” and “Happi Dance”, and both wear tabi and dance with their waist low. The dynamic male dance that is delivered to the rhythm of the full-fledged sound is a masterpiece.
On the other hand, the “woman dance” that makes the group beauty attractive without sloppy and glossy in perfect order. Wear a colorful yukata, wear a braid and put on clogs and dance. Stretching their fingertips and dancing in line with the rhythm, the team is outstanding!
A roaring thing consisting of Kane, bamboo flute, shamisen, big drum, hand drum adds flower to Awa Odori.
The highlights are the elegant tones, the dynamic song, and the performances of various musical instruments.
Souodori (all dancer participating) where Awa Odori is in full swing. The passionate Awa Odori at Souodori is remarkable.
You can experience Awa Odori by joining “Niwaka-Ren”. Any member of the age group or gender can participate. The dress is free, but Niwaka-Ren’s Happi will be rented, so if you wear a happi and participate in the dance, you will be excited to be a dancer.

The birthplace of the Awa Odori Dance Festival

The essence of “Awa Odori Dance Festival” is Hayashikotoba (a meaningless refrain used to maintain the rhythm of a song) of “Dancing fool, watching fool: all fools, so let’s all dance!” It is a famous word that everyone knows if they are Japanese.
Individual “a man dance” and glossy “a woman dance”. Brilliantly contrasting a dance performed in a group will involve the audience into the whirlpool of euphoria. If you like the festival, you want to be “Dancing fool” than just seeing it. People who are looking forward to this festival and those who are planning to participate will surely be excited.

The old name of the city of Tokushima called Awa, as the name suggests, Awa-Odori was born in Tokushima prefecture. But it is not obvious when it was born, and when it colonized.
More than 1.4 million tourists come for the Awa-Odori every year, and it is said that you want to go and participate the festival once you go. There is a famous word about the Awa-Odori “Dancing fool、watching fool: all fools、so let’s all dance!”. True to this words, it is pleased by watching and by participating.

It came to be performed now in everywhere of the whole country, but all of them was the origin of Tokushima. Many Awa-Odori Festival are held in Tokushima, but “Tokushima-shi Awa-Odori” is the largest of them.

“Tokushima-shi Awa-Odori” is held from August 12th to 15th. You can see it in every performing area around Tokushima Station, but there is some pay areas.

It has two kinds of style, “a man dance” and “a woman dance”. It is same Awa-Odori, but you are surprised to see its difference.

There is places called “The Odori Hiroba” (“The dance square”) for an adventitious performer, and you are taught Awa-Odori if you go there.