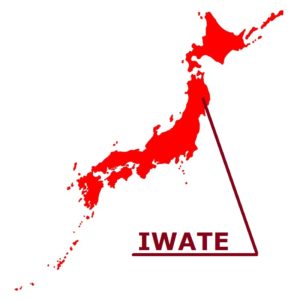 Hiraizumi in Tohoku is located in the southwestern part of Iwate Prefecture, where Oshu Fujiwara once boasted great power. The Fujiwara clan of this place built a group of temples that brought together the best of the culture of the time against the backdrop of rich golden production. It is said that the “Golden Country Zipangu” that Marco Polo wrote in the “Eastern Memoir” was about Hiraizumi.
In 2011, it was registered as a World Heritage Site as the 12th cultural heritage in Japan and the first cultural heritage in the Tohoku region. It is a precious cultural heritage where you can enjoy the unique culture that blossoms in the Tohoku region, which is a little different from Heiankyo (an ancient city in Japan).
Iwate Prefecture is located on the Pacific side of the Tohoku region. However, the area of the prefecture is the second largest after Hokkaido, so the weather is totally different depending on whether it is inland, northern coast, or southern coast. Even during the same season, be prepared as you change your clothes depending on the destination. The best season for sightseeing is from fresh green to summer when flowers bloom and the greenery increases because there are many sightseeing spots where you can enjoy nature all over the prefecture.
Morioka City, Iwate Prefecture’s prefectural office, is a place where Iwate’s culture and economy are transmitted, and is a popular tourist destination as the gateway to Iwate. There are many Instagrammable spots such as the cityscape with many retro buildings built from the Meiji to early Showa eras, and the Morioka Castle ruins, which are also famous for cherry blossoms. You can also enjoy local gourmet cuisine such as jaja noodles and wankosoba noodles experience.
In addition, if you extend your foot from Morioka, you will find Iwate’s classic tourist spot, Hiraizumi, where you can see the archaeological sites such as Chusonji, which are registered as World Heritage Sites. Hanamaki Onsen, Koiwai Farm, and the Sanriku sea view are also recommended. It is said that the high season is from early summer to summer, but Iwate has a lot of snow and you can enjoy skiing, so it is crowded with people in winter. Iwate, where you can enjoy various expressions throughout the seasons, is an attractive prefecture with abundant tourism resources.
Among Hiraizumi’s ruins, there are five places that are registered as world heritage sites where you can feel deeply connected with the Jodo thought. The most spectacular are Chusonji and Motsuji Temple, but other monuments can help you remember that time, so be sure to add it to the sightseeing course. Hiraizumi’s special feature is that each ruin is not far away, so you can turn around efficiently.
Chuson-ji Temple was built by FUJIWARA no Kiyohira to provide all the people who had died in previous wars regardless of enemies and allies. This temple is deeply connected to the Fujiwara clan, and at the beginning of its construction there were many temples such as Tahoji, Shakado, and Nikaidaido. MINAMOTO no Yoritomo, who was impressed by its splendor, built Eifukuji in Kamakura, using Nikaidaido as a model.
After the disappearance of the Fujiwara family, it was only the Golden Hall, which was built in 1142, that was lost due to wars and fires. The Golden Hall, whose main honor is the golden Amida Nyorai, was literally a luxurious hall with gold leaf inside and outside, and was built as the mausoleum hall of FUJIWARA no Kiyohira. In addition to gold leaf, pearls, ivory, and jewels using luminescent shells from the Silk Road are used. In addition to gold leaf, raden, ivory, and jewelery using luminescent shellfish from the Silk Road are used, and the glittering appearance makes you feel the glory of Hiraizumi. The Golden Hall is where the bodies of Kiyohira, Motohira, Hidehira, and Yasuhira’s head are enshrined.

Registered as a world’s cultural heritage

The Chuson-ji temple is the head temple of the northeast of the Tendai sect of Buddhism, and Jikaku Daishi founded it in 850.
In 2011, it was registered as a world’s cultural heritage of the UNESCO. Many tourists visit not only from the inside of Japan but from all over the world every day.
It was revived with the meaning which wishes the world of the peace of paradise to this ground at the beginning of the 12th century by the Oshu-Fujiwara clan, and memorial services were equally held for the lives of people who passed away in the battle. Including the Konjiki-do (golden hall), the showpiece of Heian Buddhism (a Buddhist sect established during the Heian period) of 3000 or more are charming people who visit.

The slope which continues from an entrance is Omote-sando of Chusonji (front approach), and is called Tsukimi Zaka (Moonlight Slope). The street lined with trees of the Japan cedar of approximately 400 years old follows both sides of the slope, and there is the faint fragrance of the cedar all over the area.

Designated as the specification tangible cultural properties of Iwate

This is the front gate of Chuson-ji Hondo (main hall of a Buddhist temple) which is in a 560-m point from the entrance of Tsukimi Zaka. This front gate was built in the middle of the Edo period, and designated as the specification tangible cultural properties of Iwate Prefecture.

This is the main hall of a Buddhist temple of Chuson-ji. It is a place where various main ceremonies are held. The principal image is Joroku Shaka Nyorai (4.85 metre-high statue of Shakyamuni).

The highest peak of art of the Heian Buddhism

The Konjiki-do (golden hall) was built in 1126, and is the existing only foundation remains of the ancient structure.
There is the mi-do Hall (enshrinement hall) in the depths of the case, and all are covered with gold leaf, and the gorgeousness brilliancy is the best part. Also from that, you can imagine that the Oshu-Fujiwara clan was prosperous. The principal image is Mr. Amitabha Tathagata, and the attendant image of Buddhist statue are Kannon and Bodhisattva of wisdom, furthermore, it is surrounded by six Jizo Bosatsu (Jizo Bodhisattva), Jikokuten (White Guardian of the East), Zochoten (Virudhaka). The naijin (inner sanctuary of a shrine or temple), which made magnificence by lacqure craft works such as mother-of-pearl work or piece of lacquer and metal engraving, is said to be the highest peak of art of the Heian Buddhism.