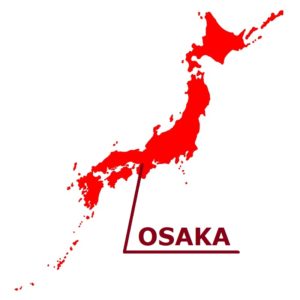 “The beginning of things starts with Sakai”. Sakai City, Osaka Prefecture, once prospered as a trade city and known as the birthplace of many cultures.
Speaking of Sakai, it is a place where many ancient tombs still exist after 1,600 years. “Daisen Mounded Tomb”, the world’s largest keyhole-shaped mounds, is one of the “Mozu burial mounds” in Sakai City. “Mozu burial mounds” together with the old city burial mounds across Fujiidera City and Habikino City was registered as a UNESCO World Heritage Site in 2019.
This is the first time that a tomb where the emperor or imperial family has been buried becomes a World Heritage Site. Sakai City people are also excited about the first long-awaited World Heritage registration.
To reach the Sakai City Hall observatory, take the Nankai Koya line to “Sakai Higashi Station” and get there in about 5 minutes on foot. If you go up to the 21st floor, which is the top floor of Sakai City Hall, there is an observation lobby where you can see the town 360 degrees. In addition to Daisen Mounded Tomb, you can see Akashi Kaikyo Bridge on the west side and Kansai International Airport on the south side. It is also fun to try to find famous spots from the direction.
An old burial mound is a tomb with a mound of soil built in the Japanese archipelago that was built from the mid-3rd century to the early 8th century. People of high status at that time were buried. Among them, “Daisen Mounded Tomb” is Japan’s largest keyhole-shaped mounds, said to have been built in the middle of the 5th century over about 20 years. It is covered with trees and looks like a hill. According to some tourist volunteers, the view changes depending on the season, such as the winter is clear and the scenery looks relatively beautiful.
About 20 minutes on foot from the city hall, there is Daisen Park, which is surrounded by trees and is full of seasonal flowers. While enjoying the scenery, walk slowly and you will arrive at the Sakai City Museum.
Established in 1980, the museum has long been loved by citizens and tourists as a facility for conveying the history and culture of Sakai City. The museum is about a 5-minute walk from the front of the Daisen Mounded Tomb. So it is recommended to visit before going around the Furuichi burial mounds and the Mozu burial mounds. You can know the origins of burial mounds and enjoy the tour of burial mounds. At the Sakai City Museum, iron armor made of iron, which is a side funeral buried with old tombs, is displayed. You can learn about the civilization of Japan that progressed with the iron and horses brought from the Korean peninsula.
According to Sakai City tourism volunteers who have been guided for more than 10 years, there are various forms of burial mounds here, from keyhole-shaped mounds to round and square-shaped mounds. There are old tombs of various sizes, and it is also a symbol of the power of the buried people.
“Looking at the bottom, it’s easy to see the magnificence. The cherry blossom trees are beautiful in spring, and the autumn leaves are beautiful. 2.85km around the old burial mounds is a walking path, so it’s recommended that you go around slowly. “volunteers told us.

Daisen Mounded Tomb (Mausoleum of Emperor Nintoku) is said to be one of the world’s three biggest graves alongside the tomb of an ancient Egyptian king called the Pyramid of King Khufu (Cheops), the mausoleum of the first Quin Emperor. Its surface area is bigger than those. When it is seen from the sky, it is a unique shape in Japan called a keyhole-shaped tumuli that unites a circle and a square. It is estimated that it was built over about 20 years in the middle of the 5th century.
The following pictures are on the same scale, comparing the aerial photographs of the Daisen Mounded Tomb and the Pyramid of King Khufu.

Pots and dishes made of glass, swords, armor were excavated

There are the funeral ritual site of the tumulus in the left and right constricted parts, and the triple moat is enclosing, but the present moat was re-dig in the Meiji era.
A jar of sueki (unglazed ware) was excavated from the funeral ritual site of the tumulus in 1950’s and the recent survey, and it became a topic as a material to know the era when the ancient tomb was built. In 1872, a long-sized stone coffin that was housed in a pit-type stone room at the front part was exposed, and pots and dishes made of glass, swords, armor were excavated. It is said that the excavated items were backfilled again, but there were records of detailed drawings, and the armor was said to be a fine piece made of gold copper.

Suitable for Japan’s largest keyhole-shaped tomb, there are over 10 tombs that are considered baicho (a small barrow next to a large-scale tumulus). Although there is the theory that it is the mausoleum of Emperor Nintoku, but it is known that it was built in a different age from Emperor Richu’s succeeded order of Emperor Nindoku that is conveyed to Nihonshoki (Chronicles of Japan) and others.

Around 2.8 kilometers of the roundabout is in place

Archaeologically, there is a high possibility that this ancient burial mound was constructed from the middle through the end of fifth century, and a negative view seems to have been suggested to be the Mausoleum of Emperor Nintoku.
Around 2.8 kilometers of the roundabout is in place and it takes 1 hour to go around.