Tokyo, Odaiba “Diver City Tokyo Plaza” Festival Square will begin exhibiting a full-scale Unicorn Gundam statue in September 2017.
One of Japan’s leading animes, the Gundam series, began its first television broadcast in 1979. The fusion of humanoid mobile weapons and mobile suits set in the “Universal Century” and the human drama depicting the growth of the hero overturned the recognition of the genre of robot anime at the time and shocked the anime world.
Since then, it has been developed not only in anime but also in comics, movies, plastic models, etc., and is now gaining popularity overseas.
From the Gundam series, this time, the full-scale Unicorn Gundam statue appeared in “Diver City Tokyo Plaza”. The height of 19.7 meters and its size is just overwhelming, but it turns into a destroy mode and emits light.
In fact, this is not the first time that a full-size Gundam has been established. In 2009, the 18-meter “RX-78-2 Gundam” first appeared at Shiokaze Park, and since 2012, it has moved to the front of Diver City Tokyo Plaza and has been a popular tourist spot. Such “RX-78-2 Gundam” will also be displayed in March 2017. The successor was Unicorn Gundam.
The highlight of such a new Gundam is the transformation that takes place four times at 11:00, 13:00, 15:00, and 17:00. The recommended one is the last one. If it is sunny, you can enjoy the change between unicorn mode and destroy mode against a beautiful sunset. Also, in the evening part, from 19:30 to 21:30, the show will be held in three stories every 30 minutes, so this is also a must-see.
“GUNDAM Café” is located on the second floor of “Diver City Tokyo Plaza” just behind the unicorn Gundam statue. There is a food menu named after Gundam, including a set menu with souvenirs and an original blend coffee of GUNDAM Café. Since it is a takeout specialty store, you can sit outside and watch the unicorn Gundam.
If you enjoy the statue of Gundam, please visit “GUNDAM BASE TOKYO” on the 7th floor of “Diver City Tokyo Plaza”. Not only can you get a variety of Gundam models, but the exhibition corner has the latest Gunpla and anime originals, so you can fully enjoy Gundam’s world view.

Many shops and fun features

The “DiverCity Tokyo Plaza” in the Odaiba area has many shops and fun features that you can enjoy with your family with amusement spots. Before “DiverCity Tokyo Plaza”, there is “Symbol Promenade Park” which also played a role as a boardwalk connecting the Tokyo Water Front City area. There are also many parks in Odaiba area.
“ROUND 1 stadium” is a spot where you can move your body plenty. Bowling, as well as bubble football, you can experience dozens of kinds of fun. There is also a ‘Kids SPO – CHA’ with a kid’s athletic and ball pool, where small children can play with plenty of movement.
Also, in front of the “DiverCity Tokyo Plaza”, “RX-78-2 Gundam” was on display from 2012, but the exhibition ended in March 2017. As its successor, Unicorn Gundam appeared. Its height is 19.7 meters and is overwhelmed by its size. Furthermore, it turns into a destroy mode and emits light. 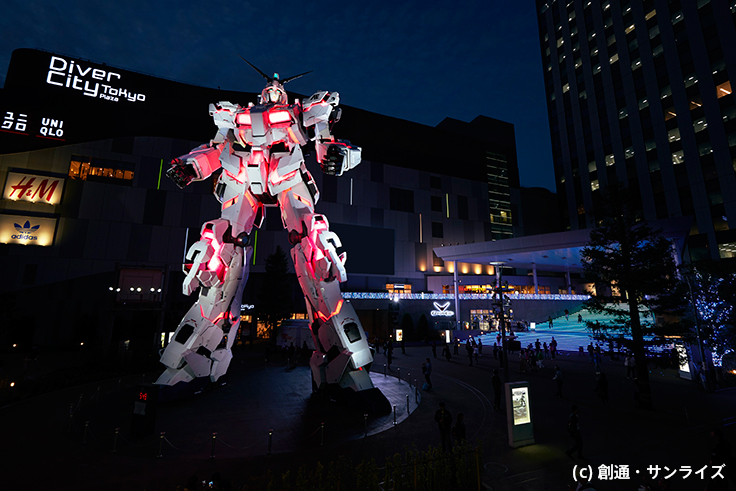 It is a night presentation that is held every few minutes for 30 minutes from 19: 30 to 21: 30 every day. Horn opening and closing, face mode change, lighting of the whole body of 50 lights, shoulder, waist, knee parts are activated, transform from unicorn mode to destroy mode.
“Full size unicorn Gundam statue” seen at hand is really impressive and beautiful. Please check with your own eyes when you stay near Odaiba.

Note : Exhibition of RX-78-2 GUNDAM was ended by 2017.03.05.
DiverCity Tokyo Plaza is a large shopping mall designed with the theme of creating a “theatrical city space.”, and it has more than 150 shops. It’s home to the world’s only full-size Gundam (Japanese famous anime) statue and offers a wide selection of Japan-themed souvenirs at many of its shops. With many authentic Japanese restaurants and convenient access to transportation, DiverCity is a fun new destination in Tokyo for overseas visitors.

In addition, “Gundam cafe” which serves foods and beverages related this animation, and “Gundam Front” where you can experience the world of Gundam are set up in the mall.

Added on 2017.01.19
It turned out that actual size Gundam’s exhibition is finished on March 5, 2017. Moreover, the facilities “Gundam front Tokyo” which can experience the Gundam world ceases its business on April 5.
In “Gundam front Tokyo”, the campaign are due to be carried out until the end. Moreover, a new project is also under preparation and it is announced for details later.