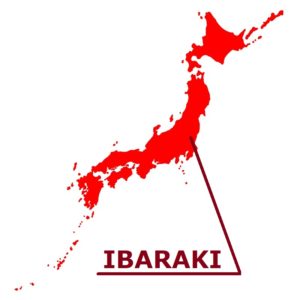 Boasting a height of 120 meters and a width of 73 meters, “Fukuroda no Taki” (Fukuroda Waterfall) is a popular scenic spot in Daigo-machi, Ibaraki Prefecture. The beautiful scenery created by nature and the sound of the water flowing down the waterfall attract visitors.
From Mito Station, you can reach Fukuroda Station on the Japan Raylway Suigun Line in about 1 hour and 10 minutes. You can enjoy the time flowing slowly while enjoying the feeling of traveling. When you arrive at the station, you will begin hiking around Fukuroda Falls.
When you arrive at Fukuroda Falls, let’s go to the 1st observation platform. At the observation platform management office, pay the usage fee for the “viewing waterfalls facility” and go through the tunnel 250 meters to the “first observation platform”.
The first observation platform is on the right hand side of the tunnel. From there, most of the visitors come to admired. The distribution is imminent in the immediate vicinity of the observation platform, and those who see it are overwhelmed.
Fukuroda Falls is a waterfall that runs down the rock surface in four steps. From the “first observation platform”, the bottom waterfall is approaching in front. It is close enough to reach if you reach out. If you look at the fence, you will be splashed with water. You will be impressed by the power.

“Fukuroda-no-Taki Fall” listed as one of Japan’s three famous waterfall along with “Kegon-no-Taki Fall” of Nikko, Tochigi Prefecture, and “Nachi-no-Taki Fall” of Katsuura Wakayama Prefecture. It is located in Daigo-machi Town at the border with Fukushima Prefecture.
The tourist attraction “Fukuroda Fall”, the representative of Ibaraki Prefecture, is a waterfall over the Takigawa River, a tributary of Kujigawa River, and boasts a height of 120 meters and a width of 73 meters. It is also called “Yodo-no-Takii Fall” (four times fall) because the flow of the fall falls four stages of the rock wall. Every season the scenery is splendid, especially the “icefall” where the falls freeze is famous.

The time went by unnoticed

“The Fukuroda waterfall” counted by one of the three Japanese greatest waterfall is a sightseeing spot which Ibaragi Prefecture is proud of. The poet-monk Saigyo priest of the Heian era had composed a poem of this waterfall.
It is the white line which is calm when you look from far away, but it will show violence which strikes the ground if you approach. You will be attracted to its beautiness and the time went by unnoticed.

The waterfall in Fukuroda which starts branch Takikawa river, is proud of a scale 120 meters in height, and 73 meters in width.
Because the flow of the waterfall drops in four steps of vast rock faces, it is also called the alias “the waterfall of Yodo” (the waterfall of four times). Moreover, when Saigyo Hoshi visited this ground a long time ago, it is told that he praised it as “this waterfall cannot taste the true character if I do not come once in the four seasons”

The line to create of the water flowing through four steps of rock faces is smooth like white thread, and sometimes it is intense and various faces are shown.

The whole waterfall may freeze pure white in severe winter, you can see the figure of the ice climber challenging the iceberg.
Moreover, in the event ‘Okukuji-Fukuroda “a journey of winter waterfall”’ held in winter, visionary scenery of winter, such as lighting of the waterfall and illuminations of the suspension bridge, is directed.