Goryokaku is famous for sightseeing in Hakodate. Goryokaku Park, in which the characteristic castle of the star-shaped pentagon is open to the public, is a more enjoyable spot to know the history of the late Edo period.
In the Goryokaku, there is an observation deck called “Goryokaku Tower”. Attention is the exhibition space “Goryokaku Historical Corridor” on the second floor. A graphic panel and scene model showing the history of the Goryokaku show the drama at the end of the Edo period. The eyes are nailed to the doll which was reproduced precisely to the powerful expression and the dirt of clothes.
The bronze statue of Hijikata Toshizo, a famous Shinsen-gumi from Hakodate, is a popular photo spot.
The glass floor “see-through floor” on the first floor of the observation deck can enjoy a view just under 86 meters.
The first floor of the tower, the atrium free of charge, is a bright glass space. It also sells food and drinks, making it a perfect spot for a break.
The Goryokaku Tower has lots of fun not only on the paid observation floor but also on the 1st and 2nd floors with free admission. On the second floor are stores such as Gotoken, a long-established restaurant in Hakodate, and MillKissimo, where you can enjoy gelato made with Hakodate materials, and it is a recommended spot for meals and breaks. The entrance hall on the first floor is full of limited-edition items that can only be obtained from Hakodate’s basic souvenirs and only at the Goryokaku Tower, so you can enjoy souvenir selection time. 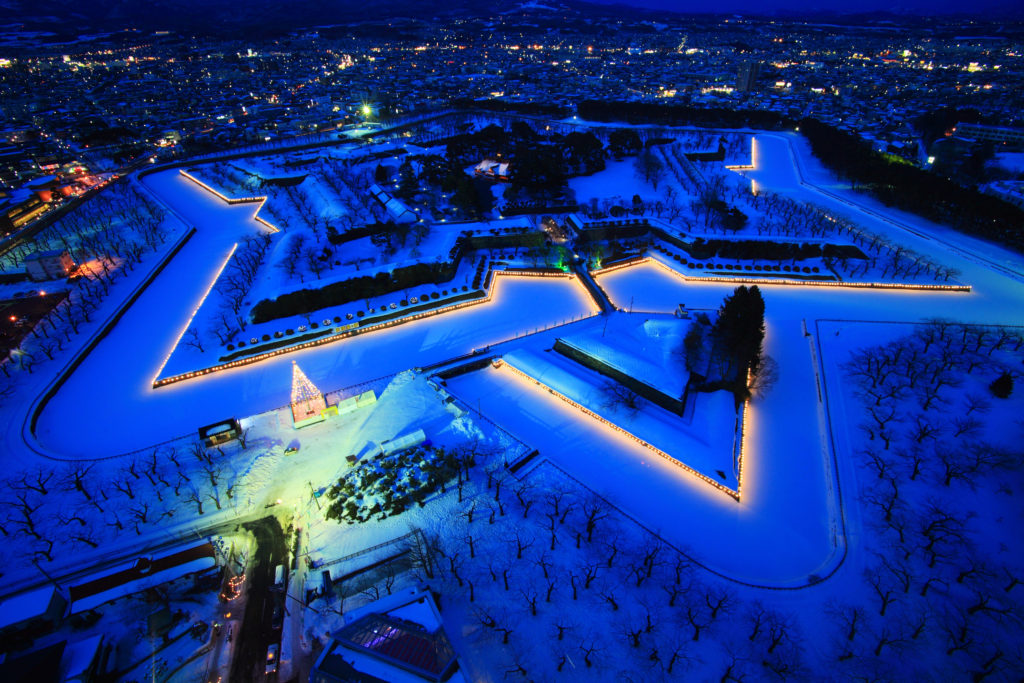 Among tourist attractions in the southern part of Hokkaido, “Goryokaku Fort” is especially famous. “Goryokaku Fort” is one of the most important places in Hakodate’s history and at the same time it is also a great memorial shooting spot where the shape of the Gobosei (Pentagram) type is impressive.
Goryokaku Fort refers to the castle in Hakodate City, Hokkaido, which was built by the Edo Shogunate in 1864. Originally built for the purpose of protecting “Hakodate Bugyosho” (a magistrate’s office) which was the political base of the Ezo land from the enemies. After the “Taisei Hokan” (restoration of imperial rule) in 1867, it became the one of the Meiji government, and now Hakodate Municipal Government is in charge of administration.

The name “Goryokaku” is said to have originated from the fact that there are five corners called “bastions”, and from the sky the mounds is a pentagonal star. It is said that this form was referred to the citadel which exists in various parts of Europe, it is very rare in Japan, and it is only in Tatsuoka-jo Castle of Nagano prefecture other than Goryokaku Fort of Hakodate city.
The current Goryokaku is widely open to the public as “Goryokaku Park”, and it is a tourist spot representing Hakodate where many tourists visit.

This is the Japan’s largest Western style castle, the Goryokaku Fort which Tokugawa Shogunate government constructed. It is the first Japanese construction site of French style method made for the purpose of the northern defense, and it is designated as a special National Historical Site.

The star-shaped site of castle becomes the park now, and several kinds of cherry trees in addition to the Someiyoshino bloom in spring around the moat, and it is famous for its cherry-blossoms.

After Hakodate war (civil war), most buildings were dismantled, but Hakodate-Bugyosho (City magistrate’s office) were restored in 2010.

It is known as the place where deserter of old Shogunate and new government troop joined the battles in Boshin War, but its role changes as the oasis for the local citizen after 1914 when it was opened to the public as a park.

The cherry tree in the embankment of the right hand of the front entrance is attractive in particular probably because there is nothing shutting out the daylight around there. In addition, the surface of the water of the moat is covered with a petal at the moment flower is about to drop, and you can enjoy different taste of its blooming.