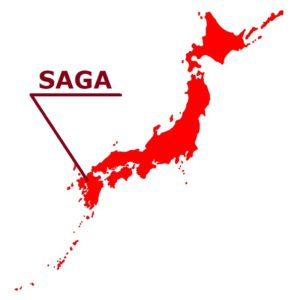 Imari City is a city located on the west side of Saga Prefecture and is famous for its Imari-yaki (Imari ware). At Ohkawachiyama, which is the center of Imari ware and boasts a 300-year history, you can experience the history and culture of Imari through painting experiences at the “Imari and Arita Yaki Traditional Industry Hall” and the “Silk Road of the Sea”. Furthermore, “Matsuuraichi Shuzo” is famous for sake with “kappa” (water sprite), and you can actually see Kappa’s mummy.
“Imari Tontenton Matsuri Festival” is the “Imari Shrine Goshinko-sai Festival” (an imperial visit by god) held in Imari city, Saga Prefecture. Also known as “Imari Kunchi”.
The “Imari Tontenton Matsuri Festival” is a very brave festival counted as one of the three major fight festivals in Japan, along with “Niihama Taiko Matsuri (Niihama Drum Festival)” and “Iizaka Kenka Matsuri (Fight Festival)”.
Mikoshi (Portable Shrine) ‘s “Battle” is the biggest highlight of the festival, and it seems that the sound of the signal of the beginning of the battle is heard as “Ton, Ten, Ton” and is called “Imari Tontenton Matsuri Festival” .
The main feature of the festival is that Mikoshi and Danjiri (festival float) hit each other violently, with the drums of Ton, Ten and Ton. It is a large festival that attracts 150,000 spectators every year.
Mikoshi waits for Danjiri to arrive at the battlefield and proclaims Danjiri, “Don’t come yet”. On the other hand, “still”, Danjiri burns Mikoshi. There is a humming voice from the audience saying “incite! Incite!”.
The general then raises the flag and clashes violently. Each other will go ahead and combine at the signal of “hold up”. Combine the sticks attached to the front of Mikoshi and Danjiri and beat the opponent from the front and you will win if you climb up.
“River drop” is performed to the climax of the festival. In the battle that takes place on the shores of the Imari River, each other drops into the Imari River. Then both sides pull up by all outs, but if Mikoshi goes up first, it becomes fertile the next year. If Danjiri goes up first, the next year will be high fishing. It is a good event to conclude the Imari Tontenton Matsuri Festival.

The heroic festival the wild Mikoshi and Danjiri clash intensely

The “Imari Tontenton Matsuri Festival” performed over three days late in October in the Imari shrine in Imari-shi, Saga every year.
It is the heroic festival that the wild Mikoshi (miniature shrine) and Danjiri (a type of dashi (float) or danjiri used at shrine festivals) which rowdy people hold clash intensely, and the people of the district of Imari get used and familiar from young time.

One of the Japan’s three biggest fight festivals

It is the traditional festival of the Imari-shi as one of the Japan’s three biggest fight festivals. It is referred to also as “Imari Kunchi.” During the period of a festival, the sound of the drum of “Tontenton” is the signal for the start and the town is in full festival mode. The battle that Danjiri clashes with the wild Mikoshi intensely in several places of cities takes place.

Beating is continued even after a performer gets down from Danjiri

Before a battle, the wild Mikoshi is gone in procession at the head, sounding the sound of a drum and a shout.
When both shouts affect a signal by a drum of the fast rhythm, a battle begins.
The drum is beaten in Danjiri, until just before a mikoshi falls, and beating it is continued even after a performer gets down from Danjiri.

To tell bad or good luck of the year

The climax of a festival is the last battle called “Kawa Otoshi” (dropping to the river) held in the evening of the final day. The brave figure which falls into the Imari river with both sides grappling together is the highlight. The game is determined by raising the Mikoshi on land, and to tell bad or good luck of the year. It is said that if the wild Mikoshi wins, it is a good harvest in the year, if the Danjiri wins, big catch.