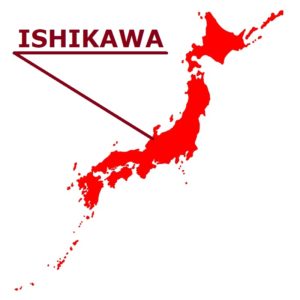 The Noto Peninsula, an exchange base for the Sea of Japan culture, has nurtured its own culture and has held numerous rites and festivals. The most excellent thing is Shinto Rituals of Lantern, collectively called “Kiriko Matsuri” (Kiriko Festival). It will be held in about 200 districts in the summer to illuminate Noto.
The original landscape of Japan is a simple rural village and fishing village, and together with “mikoshi” (portable shrine), carry up Kiriko up to 2 tons and 15 meters in height, and parade around violently. Gion Faith and the rites and festivals that emerged from the shinto rituals over the summer have made a unique development as each district competes for its power. And so far, there is a unique area where Shinto Rituals of Lantern has accumulated.
It’s no exaggeration to say that if you travel in Noto in the summer, you will be able to meet the Kiriko Festival.
In summer and autumn festivals in various areas of Noto, a huge “goshinto” (a lantern that is dedicated to gods providing happiness), called Kiriko as a companion to mikoshi, was carried out by shrine parishioners and parading around the city.
Kiriko is an abbreviation for Kiriko-toro (kiriko lantern). In the area around Nakanoto, there are also areas called “Hoto” or “Oakashi”. It is a festival tool that adds flower to the Noto festival. The shape of Kiriko is a rectangular lantern, and characters (floating characters), crests, and drawings (such as samurai drawings) are drawn on the white Japanese paper stretched on its four sides. When the lights are lit from the inside, they emerge fantastically.
There are long sticks (katane sticks) for carrying in large numbers, and decorations such as bomboli, curtains and shimenawa (a Japanese sacred straw festoon) are given. In some areas, elaborate sculptures, gorgeous objects using gold leaf and lacquer are also seen, and they are sometimes expressed as floats. The material seems to be used locally of Asunaro wood.
The size varies from large to over 15 meters in height, 2 tons in weight, and from a huge one that requires more than 100 bearers to a cute one carried by an infant. At present, there are many Kiriko that is about 4 or 5 meters high due to electric wires.
The Kiriko Festival is held throughout the Noto Peninsula, and the Noto Peninsula itself is a tourist attraction. You can experience the scenery of village-vicinity mountain, village-vicinity sea, which is said to be “original scenery of Japan”, and a rich food culture nurtured by tradition. You can enjoy one of the best hot springs in the country such as Wakura hot springs town and Wajima hot springs resort. Another attraction of Noto’s travel is that you can touch the heart of hospitality, which is said to be “noto people are simple and warm”.

Noto’s “Kiriko Matsuri Festival” will be held in about 200 districts of the Noto Peninsula from July to October. If you visit Noto this time, you can definitely meet Kiriko Matsuri Festival, it is four months that Okucho is the most hot in the year. It is a festival that carries a huge Kiriko Lantern called “Kiriko”, its height varies from region to region, from several meters to tens of meters in size. Some huge kiriko weigh more than 4 tons.
Kiriko has “Katane Stick” (long carrying stick) and can move like festival floats. There are various forms, such as “Sasa Kiriko” which can be carried even by children, “Musha-e Kiriko” with Musha-e (Ukiyo-e prints of warriors) drawn like Neputa. There are also gorgeous Kiriko which is decorated with gilt or lacquer in some areas. Kiriko Matsuri Festival, which is supposed to start from the wish of ‘an attempt to secure protection from a plague’ in the Edo period, was certified as a Japanese heritage established by the Agency for Cultural Affairs in 2014. Today, in addition to tourists outside the prefecture, attention is also gaining from overseas.

Festivals being held somewhere every week

The festivals of Noto have each features and originality

The fire and fireworks are important elements

The fire and fireworks are important elements of the festival of Noto like a boisterous dance and Mikoshi (portable shrine) with pouring sparks in the Abare-Matsuri (the Violently Festival), the Houryu-Tanabata Kiriko Festival being launched fireworks. There are some festivals like scrambling for an amulet being attached to the top of the ignited Hashira-Taimatsu (pine torch).

First-rate of the festival of Noto

In the Saikai Festival, women wore an apron on the yukata with red koshimaki (a Japanese petticoat) and continue dancing boisterously in the precincts of the Shinto shrine for nearly one hour. This dynamism is first-rate of the festival of Noto.

The Inheritance of Japan

The three of Noto festival, that is the Abare-Matsuri (the Violently Festival) of Noto-cho, the Saikai festival of Shika-machi and the Houryu-Tanabata Kiriko Festival of Suzu-shi, is unmissable. In April, 2015, “the Kiriko Festival of Noto” was registered as the first of “the Inheritance of Japan”.