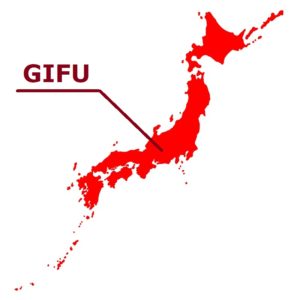 Speaking of “Magome Juku” in Nakatsugawa City, along with “Tsumago Juku” located in the neighboring Nagano Prefecture, it is a sightseeing spot that represents Nakasendo Road. By the way, Nakasendo is one of the five highways developed during the Edo period to connect Kyoto and Edo. The length of Nakasendo is about 530 kilometers. There are 69 post towns from Nihonbashi of Edo to Kyoto.
Tokaido Road, another highway from Edo to Kyoto, is about 492 kilometers, which is closer in distance. However, there were many dangers in Tokaido Road, such as the closure of the Oi River and the risk of marine accidents caused by boat trips. In that respect, Nakasendo Road is rough, but it is less difficult and relatively safe.
At that time, there was a post for people passing through this road, and Magome Juku was born here as the 43rd post on Nakasendo Road. Magome Juku, which still retains the image of the old post town, has become a major tourist destination in Gifu Prefecture.
It is also famous as the birthplace of the literary writer “Shimazaki Toson”. There is also the “Toson Memorial”, which is the birthplace of Toson and the main site of Magome Juku. In addition, it has earned one star in the world-famous Michelin travel guidebook. There are many tourists from overseas.
Generally speaking, there are images of steep cobblestone slopes and old towns, when you say Magome Juku. “All the Kiso Roads are in the mountains,” as Toson noted, Nakasendo Road is mostly mountainous in its section. Therefore, it is often the case that the post town is surrounded by mountains. Even among them, the geographical conditions where Magome Juku is located are quite unusual. Magome Juku has no flat road because it is open to the mountain ridge. There are steep slopes of up to 600 meters, and some places have steep slopes where power is unexpectedly applied to their feet. Souvenir shops and restaurants are lined up on this slope, and it is a place to enjoy regardless of age, from old people to young people. It’s a slope so it’s just a good exercise.
Pass the souvenir shop from the entrance to Magome Juku and walk a little to see a large water wheel. This is a large watermill with the symbol of Magome Juku. It is said that hydroelectric power is generated using this water wheel. The generated electricity is used to light up the water mill and for indoor lighting.

It retains the atmosphere and the buildings of those years

“Yoake-mae” (Before the Dawn) by Toson SHIMAZAKI (a great novelist of Japan) begins with the word “Kisoji Road is all in the mountains”. That Toson SHIMAZAKI was born and raised is Magome-Juku which is post-station towns of Nakasen-do Road in Shinshu Kiso Valley. Nakasen-do Road starts from Nihonbashi in Edo (Tokyo), passes through Joshu (now Gunma), Shinshu (now Nagano Prefecture), Mino (now Gifu Prefecture), and it leads to the Sanjo Bridge in Kyoto , 69 post-station towns were set up. Among them, Magome-Juku is one of the post-station town which retains the atmosphere and the buildings of those years up to the present age.

The Magome-Juku (post‐town) leaving a feature of the Edo era is extreme popularity as a sightseeing spot. The Magome-Juku in Nakatsugawa-shi, Gifu is a tourist attraction on behalf of the Nakasendo(Edo-period Edo-Kyoto highway) with “The Tsumago-Juku” located in neighboring Nagano.

Designed in the Edo era to link Kyoto and Edo

The Nakasendo is one of the Five Routes having been designed in the Edo era to link Kyoto and Edo. The post town for people via this way was built at that time, and the Magome-Juku seemed to be born as the 43rd of them.

Because the Nakasendo through Kiso, it is called “Kisoji” and many tasteful post offices have been left in there.

One star by Michelin Green Guidebook

Many well-known literary person take a trip to this Kisoji and leave a novel and a phrase. You can visit the place concerning that masterpiece in Magome. This place which is the stage of the novel “Yoake mae” (Before the Dawn) is home of great writer “Toson Shimazaki”, and is the steep town of hill having a total length of more than 600m.

Stone pavement remains on the center of the street, and there is a row of houses reminiscent of the Edo era closely both sides of it. It was given one star by Michelin Green Guidebook.