Kyoto is a classic sightseeing place where you can experience the ancient culture of Japan, but Nara has not lost. Nara has a lot of history that has been handed down for over 1000 years. Recently, not only Japanese but many foreigners have visited to experience the Japanese culture and history. Among foreigners visiting Japan, 1.6 million foreigners visit Nara every year.
Nara Park is one of the most popular tourist spots in Nara that is loved by both domestic and overseas. The old capital Nara has a history of 1300 years since it was moved to Heijokyo in 710. The prefectural park in Nara is “Nara Park”. The vast grounds are lined with historic temples and shrines such as Kasuga Grand Shrine and Todaiji Temple, which are World Heritage Sites. The Nara National Museum is fascinating to experience the Japanese culture of the Nara and Heian periods.

Fantastic places in cool Japan
Kasuga Taisha Shrine, Nara
https://diversity-finder.net/tourism/kasugataisha-shrine-nara
"Kasuga Taisha Shrine" in Nara is the grand head shrine of Kasuga Shrine with about 1000 shrines in Japan. Here, "ujigami" (guardian god) of the Fujiwara family who has a brilliant achievement in the history of Japan is enshrined. It was built in the Nara era in the hope that the people will prosper, protecting Heijo-kyo (the ancient capital in the eighth century located in Nara City). It is transmitted that Fujiwara no Nagate made four shrines at the foot of Mt. Mikasa in...

In addition, more than 1000 deer live in Nara Park, and you can give deer rice crackers and touch them. You can enjoy leisurely sightseeing in the old city away from the hustle and bustle of the city. Please enjoy the original scenery of Japan that has had a great influence on the sensibility of Japanese culture as a famous place for cherry blossoms in spring and a famous place for autumn leaves in autumn.
Nara Park has many historical buildings, but if you try to see all of them, you can’t go around in a day. Here is an ideal route to enjoy popular spots in one day.
Let’s start with Todaiji Temple. It took about 40 years to complete in 752. After two disappearances and reconstructions, the current Nandaimon (South Gate) was built in the Kamakura period. Here, we will walk while carefully observing the left and right statue of Kongo Rikishi (the guardian gods at a temple gate) and the precious architectural style with the atrium on the second floor.

Fantastic places in cool Japan
Todaiji Temple, Nara
https://diversity-finder.net/tourism/todaiji-temple-nara
At that time, Todai-ji Temple, with its world-class wooden buildings and Buddha statues, is said to have been created by collecting the highest technologies and sublimed into art. The great power of the ruler at that time can be seen. However, it was probably because of the people's faith at that time that they were rebuilt over and overdue and destroyed.Beyond the eternal time, the power to impress people is probably because "prayer" was included. However, as we live in the 21...

Mount Wakakusa appears in front of Nigatsu-do at Todaiji Temple in the direction of Sangatsu-do. At the foot of the mountain, there are many “deers” that are famous in Nara Park. You can see deer anywhere in Nara Park, but it is a spot where many deer gather. The deer in Nara Park is a wild deer. However, even though it is wild, it is well managed in the city and is designated as a national natural monument.

If you are satisfied with the walk around Mt. Wakakusa, head to Kasuga Grand Shrine from the summit. The best way to go to Kasuga Taisha is through the Kasuga Primeval Forest. Unlike the route to the summit of Mt. Wakakusa, when you enter the primeval forest, you will walk along the promenade covered with many trees. It takes about 50 minutes from the summit of Mt. Wakakusa to the foothills of Kasuga primeval forest.
Kasuga Grand Shrine, built in 768, is registered as a World Heritage Site and an important national cultural asset, and its history goes back to Heijokyo. It is also known as a sacred place because it was built with the hope of the prosperity of the people and there is a big cedar that is 800 years old. There are many gods enshrined in the main hall.
The highlight of Kasuga Grand Shrine is the corridor where beautiful lanterns are lined up. You will feel that people’s wishes have been put in the 3,000 lanterns donated by both people and samurai in each period up to here. At night, the lanterns are lit and become a fantastic space.
Leave Kasuga Grand Shrine and go through Kasuga Omotesando to Kofukuji Temple. Aiming to be a five-storied pagoda, a symbol of Nara Park. The highlight of this five-storied pagoda is its powerful, dignified appearance and architectural style. Although it was built in 730, it disappeared five times and became the present tower around 1426.

Introducing access to Nara Park. We recommend using public transport. The nearest station is Nara Station on the Kinki Railway, and you can reach Nara Park in about 5 minutes on foot from there. You can get to Nara Park in 2 minutes by taking the “Gurutto Bus” that goes around the center of Nara city. In the case of the bus, it will go to Kasuga Grand Shrine.

Let’s use it if you go around the large Nara Park.
Nara Park is a vast site with historic heritage and a long-lasting nature. Please spend a day slowly and enjoy a walk in the park.

Charms and Highlights of Nara Park

Nara Koen Park boasts an extensive site of 4 kilometers in the east and west, 2 kilometers in the north and south and 660 hectares in which the venerable shrines such as “Todaiji” and “Kasuga Taisha” are built. There are rich greeneries in the surroundings, and 1100 deer inhabits the park. It is famous for its cherry blossoms in spring and autumn leaves in autumn.
Recently, the number of tourists increased with the “1300th Anniversary celebration of Nara Heijo-kyo Capital” in 2010, and as a holiday it will be a popular spot with a queue and it may be kept waiting. For this reason, it is recommended not to visit everything in Nara Park, but sightseeing by focusing on what you are interested in. In addition, Nara Park does not have many restaurants unexpectedly for its famousness. Therefore, it is better to check the places you can eat in advance. 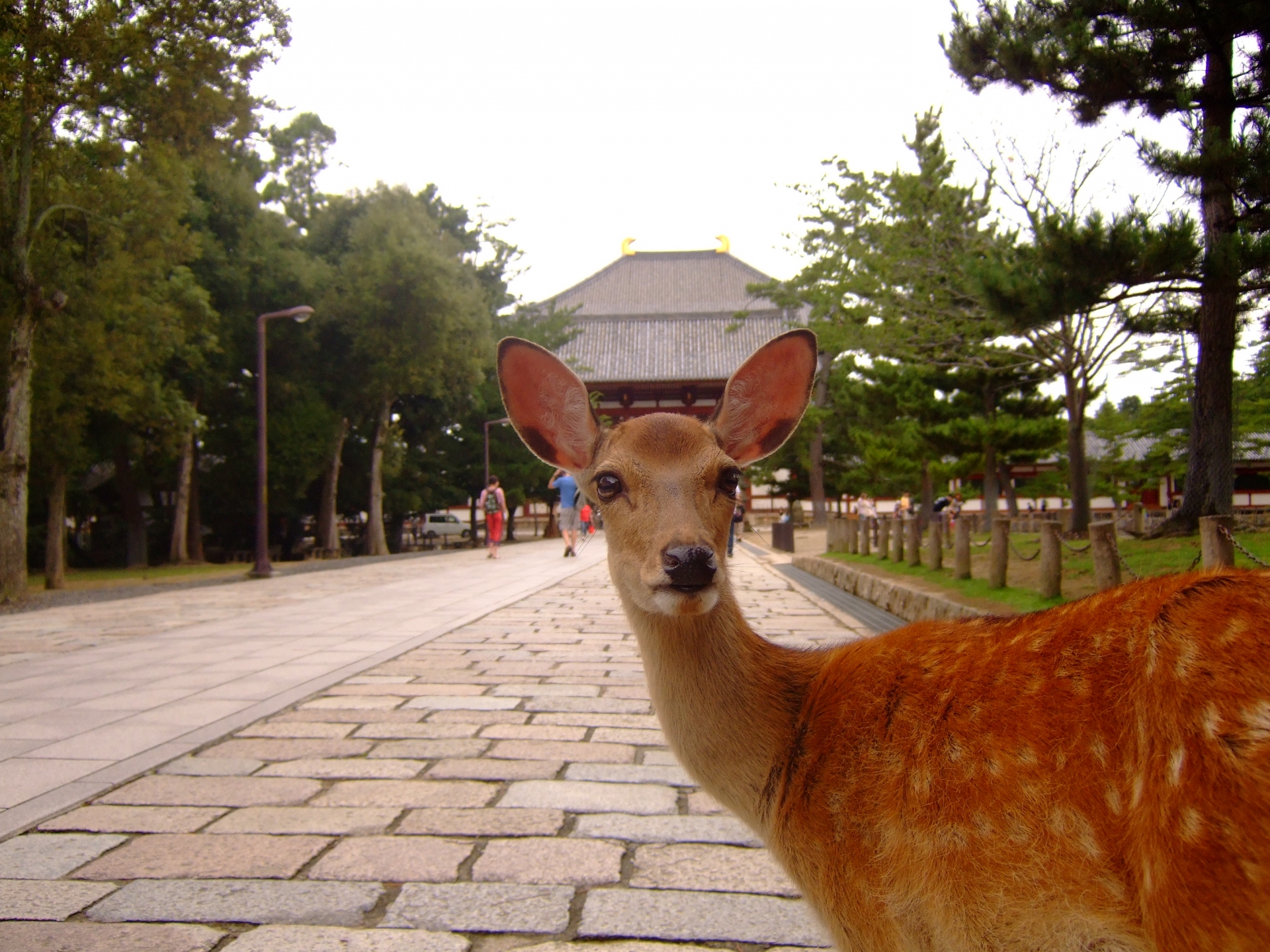 Nara Park is a place changed as a park in the Meiji era as the place which has been maintained from the Heian period as the precincts of Todaiji Temple, Kasuga Taisha Shrine, Kofukuji Temple etc. which are registered in World Heritage Sites. After that, Wakakusa Mountain and Kasuga Primordial Forest etc. were also incorporated and it became the current area.
Currently there are numerous events throughout the year at Nara Park, and there are cultural facilities such as the National Museum and Shosoin in addition to the above world heritage in the park. In addition to the famous “Nara park deer” in nature-rich parks, many other wild animals such as raccoons and mussels are inhabited. It is a comprehensive park where you can enjoy history, culture and nature. Access to Nara Park is free of charge 24 hours 365 days.

Nara Koen Park which many deer greet is a tourist resort popular also as an autumnal-leaves spot.
Trees, such as a maple, a ginkgo tree, and a Chinese tallow tree, color all at once in autumn, and a tasteful nature walk can be enjoyed. It is nice that there are 21 places of rest stations, 140 benches in the park, so you can take a rest substantially. How about enjoying the time made leisurely carrying out a walk or giving the deer food?

Surrounded by the deer

It will seem “This person buys Shika Senbei (baked snack for deer)” only by taking out a wallet around a Shika Senbei counter, and will be surrounded by the deer. Seemingly, deer think “people, who have not seen before, give food.”, it seems that therefore, a tourist is crowded with the deers and be run after by them. 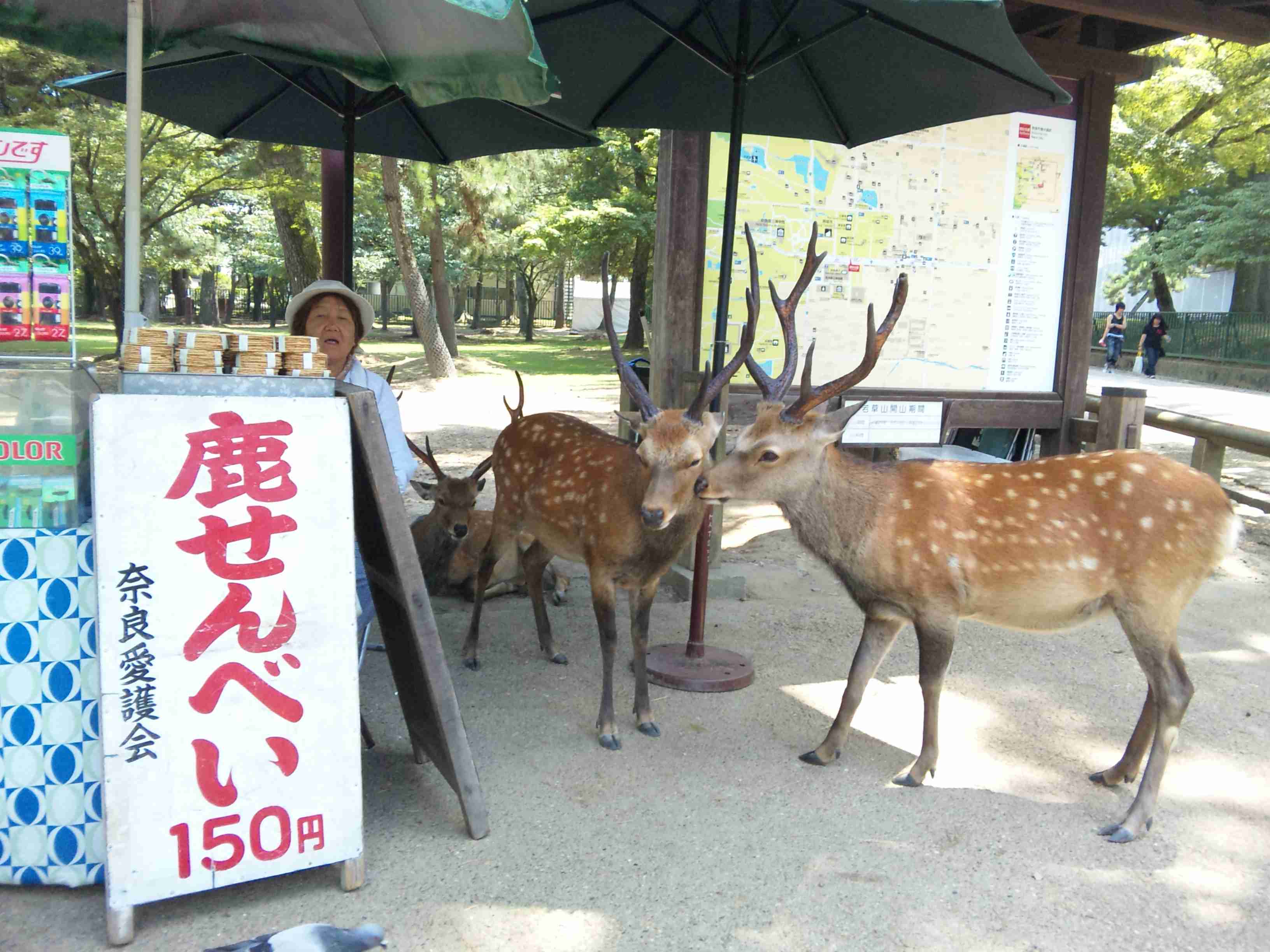 When giving a Shika Senbei to a deer, there are notes.
If it divides and give them a half after being seen a whole Shika Senbei first, it will be attacked by high probability whether the deer thought that they is irritated.

Foundation for the Protection of Deer

Incidentally, even if a deer eats the inspection sticker which has bundled this Shika Senbei, it is made of pulp and soybean ink 100% so that it may be OK.
The inspection sticker of the mark of a deer to a white ground is sold by the Foundation for the Protection of Deer in Nara Park. These sales serve as an activity fund of this foundation, and are also allotted to the injured rehabilitation hostel management of a deer and auxiliary activities of childbirth.

Deer may return a bow

Presenting quickly is safe if you think that you will give Shika Senbei. Then, if you say “thank you” with bowing by raising a hand highly, a deer may return a bow.