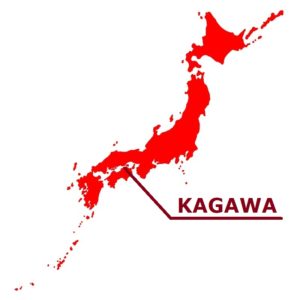 Ritsurin-koen Garden is a Japanese garden in Takamatsu City, Kagawa Prefecture. It is designated as a national scenic spot and you can enjoy different style gardens in the early Edo period and early Taisho period. It is a green space, and it is a spot where many people from locals to tourists visit.
Ritsurin-koen Garden has a very large site area of about 16.2 hectares. This is the largest area among daimyo gardens (a garden of a feudal lord) in Japan. Including Mount Shiun-zan as the background, it reaches about 75 hectares, which is the best among the gardens designated as cultural properties.
In this daimyo garden, mountains and valleys are arranged around a large pond, taking into account the convenience of walking. Take a leisurely walk around the six ponds and 13 rock formations in a large site. It is divided into a southern garden that reflects the appearance of the Daimyo Garden in the early Edo period, and a modern northern garden that has been developed since the Meiji period, so you can enjoy different beauty.
Tsukiyama (small hills) called “Hiraihou” is the best view point in the garden and is said to have been created in the same way as Mt. Fuji. “Kikugetutei” is named after a passage from the Tang Dynasty poem that “If you scoop water, the moon is in your hand”, and it is a stunning sukiya-style building that blends in with the surroundings. Also, “Neagari-Goyoumatsu”, which is said to have grown into a huge pine after planting a bonsai, is also a masterpiece. In addition, there are plenty of other attractions such as the secret tea room “former Higurashi-tei”.
The natural environment of the vast site is very good, and you can observe not only trees and flowers but also fish such as cormorants and wild birds. The kingfisher we see throughout the year is especially popular because of its beautiful appearance in the garden. The beautiful flowers of the seasons such as red plums and flower buds will delight the viewer. In addition, you can see creatures such as cormorants, catfish, and even more in the pond.
Ritsurin-koen Garden offers a variety of dining options. At “Garden Cafe Ritsurin” you can enjoy Italian food. It works with local producers and serves dishes made with fresh ingredients. In addition, “morning rice gruel” which can be enjoyed early in the morning at “Hanazono-tei” is a nice reward for tourists who get up early. At “Kikugetutei”, you can enjoy matcha and tea cakes at a teahouse with plenty of emotion. Several other restaurants are also available.

Takamatsu City Kagawa prefecture special scenic spot “Ritsurin-koen Garden”. All the scenes that seasonally shown everywhere are beautiful and it will not stop attracting visitors even after the eternal time of 400 years. There are lots of sightseeing gardens that are integrated with surrounding nature such as spring cherry blossoms and crimson foliage in autumn.
Takamatsu City with Ritsurin-koen Garden is located in the middle of Kagawa Prefecture long in the east and west. It is one of Shikoku’s biggest cities in the Sanuki Plain facing the Seto Inland Sea and a city visited by many tourists. Ritsurin-koen Garden is located about 2 kilometers south of JR Takamatsu station, and is located in the center area of ​​the city and access is excellent.
The huge scale of the Ritsurin-koen Garden can also be said to be the highlight. While being a sightseeing spot close to Takamatsu city center, it boasts an overwhelming size of about 760,000 square meters in total area. The scenery that the beautifully landscaped gardens and the deep green Mt. Shiun harmoniously combine is exceptional.

Ritsurin-koen Garden started landscaping in the second half of the 16th century. After that, the successive lord of the Matsudaira family who was supposed to rule Takamatsu from 1642 was completed over a hundred years and was further refurbished. This Daimyo garden was opened to the public as a prefectural park in 1875, and was designated as “special scenic spot” in 1953. Beyond the time of 400 years, it has informed the figure of the early Edo period.
To the Ritsurin-koen Garden, you can arrive immediately by using a bus or train from JR Takamatsu Station, Takamatsu Airport or Takamatsu Port. Even if you take a limousine bus from the airport, you can reach it in about 30 minutes. Besides that there is also a way to use a taxi or bicycle from Takamatsu station. When you come to Takamatsu City, please stop by all means.

Ritsurin-koen Garden is a very large garden of total area 75 hectares in Takamatsu-shi.
Landscape gardening is started in the early 17th century, current Ritsurin-koen Garden was completed after more than the next 100 years. It was designated as a nation’s special place of scenic beauty by the Cultural Properties Protection Act in 1953.

It consists of the south garden, which is the classical Japanese circuit style garden with 6 ponds and 13 Tsukiyama (an artificial hill) located skillfully, and north garden, which was developed in a modern manner in the Meiji era.

It is tasteful in each seasonal scenery, and has both beauty full of variety to be said “Ippo Ikkei” (one step a good scenic). It is a garden on behalf of Japan which got three star in The Michelin Green Guide Japan.

Fantastic beauty of the lighted up night scene

It is the spot that is famous for a cherry tree and the colored leaves. Many tourists come in spring and autumn every year. Of course to see the cherry tree and the colored leaves during the daytime are worth seeing beautifully, you can enjoy fantastic beauty of the lighted up night scene, too. During a period of lighting it up, it is opened by night.

Please the eyes of the visitor seasonally

Flowers more than 100 kinds please the eyes of the visitor seasonally. It is an ideal place to take a walk through the garden in families leisurely.