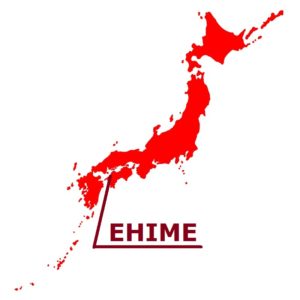 Ehime Prefecture is famous for its haiku and hot springs. The nature of Ehime, sandwiched between the Shikoku Mountains and the Seto Inland Sea, nurtures this culture and climate. The benefits are from “Umi no Sachi” (Gifts of Sea) to “Yama no Sachi” (Gifts of Mountain). From small children to couples, there are plenty of sightseeing spots where you can experience pure history and nature.
The Japan Railway Yosan line is divided between Iyo City and Ozu City, two routes running on the mountain side and one running on the sea side. Of these, the latter is Ehime’s sightseeing route, which is popularly known as the “Lovely Iyonada Line”. The view of Iyonada Sea continues from the train window. Shimonada Station is a small unmanned station that is especially known as a tourist spot.
There are many “stations you want to get off at once” in Japan. Shimonada station is so popular that it competes for the top. You can come to see the blue sea with your friends, watch the sunset with your lover, or stop by while you are traveling alone. Anyway, this is a place that cannot be removed for sightseeing in Ehime.
You can see the Seto Inland Sea directly from the station platform. Until National Route 378 connecting Iyo City to Uwajima City was opened, it was famous as a station near the coast of Japan. In addition to regular trains, Shimonada Station also stops a sightseeing train called “Iyonada Sea Monogatari”.
Since the station itself is a tourist spot, there is no problem with access. Shimonada Station is popular among a wide range of people regardless of age or gender, such as enjoying the scenery from the platform, spending a luxurious time on a sightseeing train, taking a break at a nearby café, and taking pictures around the station. When you get off the station, the beautiful sea of Seto Inland Sea spreads in front of you. It is also widely known as a sunset view spot.
The “Sunset Platform Concert” is held on the first Saturday of September every year, with the sunset on the back and is crowded with many spectators.

The closest station to the coast in Japan

Shimonada-eki Station is a station of Yosan-sen line of JR Shikoku. This place is known as the station closest to the ocean, it is popular also from railway fans, and it is a place where many visitors enjoy photography. It is also famous as a place often used as a shooting place for film and drama. It is also known as a spectacular sight of the setting sun, so it is good to visit that time.

Shimonada-eki Station is not that big, it is a single track railway. Originally it is a wooden station building, it is an unusual station building which is still present, while it is being refurbished little by little. There is a waiting place in the station and a ticket window which is not used anymore in the other.
Once at this station, the railroad and the coast were close to each other so that the waves could hit just below the platform. Therefore, it was also called “the closest station to the coast in Japan”. After that, the road opened in a way that reclaimed the sea, but still you can see the Iyo-Nada Sea from home.
The “Shimonada-eki Station” in Iyo-shi, Ehime is the unmanned station which many people say “I want to get off at this station once”. What does attract them?

The beautiful sea of Setouchi opens

It was “the closest station to the coast in Japan” in the past, and the beautiful sea of Setouchi opens all over the very front if you go down this station.

In addition, it is known as a superb view spot of the setting sun, and was used as a shooting place for a TV drama, and is often used for the photograph of the advertisement.

The scenic spot of setting sun

Recommended time to visit Shimonada-eki Station is not only the day. It is the scenic spot that you can see the sun setting in the sea undisturbed anything.

“Shimonada-eki Station” where collaboration with the sea which reflected shiningly the sunlight in the daytime, and the sky which is dyed in thin pink with setting sun when it is in the evening, is beautiful at all. It is the station which wants to stop over once. It is a station of the beautiful unexplored region which Japanese people just accept.
“I would like to visit, only in order to go to see this station specially. “ A wonderful station to think of like that is this “Shimonada-eki Station”.