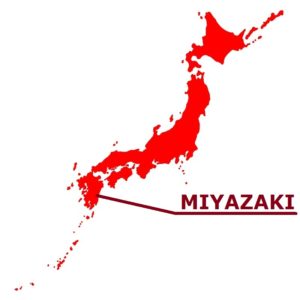 Takachiho is an ancient mythical village. It appeared in “Kojiki” (Records of Ancient Matters) and “Nihonshoki” (Chronicles of Japan), and even today, Kagura is dedicated on a daily basis. This area has a high altitude and a large temperature difference during the day in Miyazaki, which is warm. There is also the Gokase Ski Area, where you can ski only in winter in Kyushu.
Ama-no-Yasuharae where Yao yorozu no Kami (eight million gods) gathered, “Ama no iwato” (Cave of heaven) where “Amaterasu Omikami” (a sun goddess) was hidden, and “Ama no iwato Jinja Shrine”, “Sarutahiko” (Shinto god) and “Ameno uzume” (goddess of entertainment) married and lived “Aratate jinja Shrine” and Tensonkorin (the sun goddess’s grandson’s descent to earth), etc. there are so many things to see. Visiting night Kagura is another pleasure.
Takachiho Gorge is a gorge where the pyroclastic flow erupted from the volcanic activity of Aso was eroded. Enjoy the beauty of nature. There are also hot springs, so you can relax slowly.
Takachiho Gorge, designated as a national scenic spot and natural monument, is a gorge with a 7-kilometer cliff that is 80 to 100 meters high along the flow of the Gokase River. It is a tourist spot that represents Takachiho and is known for its many attractions along the canyon.
One of the highlights, “Manai Falls” is one of the “100 Best Waterfalls in Japan” and has a 17 meter drop. This waterfall has the myth that the water that springs from “Amanomanai” where “Ame no murakumo no mikoto ‘” moved water to this area where there was no water at the time of Tensonkorin.
There is an “observation deck” on the promenade along the river, where you can see the whole view of the waterfall. In addition, you can get close to the waterfall if you take a rental boat! Let’s enjoy the spectacular scenery.
Takachiho Gorge has plenty of steep cliffs. The characteristic prismatic shape is formed by cooling and solidifying lava.
In particular, the “hermit folding screen” boasting a height of about 70 meters is impressive. You can enjoy the powerful scenery created by nature as it is named for “the beauty of art that can be achieved by a hermit with the ability to immortalize”!
There are many other points to see, such as “Takachiho Sandanbashi Bridge” and “Tamatare Waterfall”. It seems that you can spend a good time while being healed by beautiful nature.

The place connection with the Japanese myth

In a Japanese myth, there is an episode called Tenson-Korin (the sun goddess’s grandson’s descent to earth) which God of the Japanese founding of the country comes down. Ninigi-no-mikoto which was a grandchild of Amaterasu Omikami (the God of the sun) got down out of the world of heaven on the place called Takachiho with five God with the three sacred treasures of the Japanese Imperial Court (mirror, comma-shaped bead, sword).
Takachiho is a town of the place between mountains located in the northern part of the Miyazaki prefecture. As a hometown of the myth in connection with the historical fact of Tenson-Korin, there are historic olds temple, such as the “Ama-no-Iwato-Jinja Shrine” (heavens stone door shrine) and the Takachiho-jinja shrine, and many tourists visit every year.

The natural treasure of the country

Takachiho gorge is located in the place which separated a few from the central part in Takachiho-cho town. It is the beautiful gorge which Gokase-gawa river flowing into the Hyuganada sea from the Kyushu Mountains of the water source created.
Because Gokase-gawa river has sharpened a lava plateau made of the volcanic activity of Mount Aso taking a long time from ancient old days, a valley was formed. It was specified as the scenic spot and the natural treasure of the country in 1934 by its beauty.

The promenade is maintained along the gorge

Since the promenade is maintained along the gorge, it can take a walk looking down on the contrast of the water of Gokase-gawa river which is likely to be sucked in and which shines green, and the rock of violent columnar joint.

Enjoy the scene from the surface of the river

The highlight of Takachiho gorge is Manai-no-taki waterfall of 17 meters of drops to flow into the gorge. It is the beautiful waterfall chosen also as Japan’s Top 100 Waterfalls. You can see the waterfall from the promenade in Takachiho gorge, and it is also possible to approach to near it by a boat. As for the waterfall to look up closely from a boat, cool impression is plentiful. It is such scenery to look at forever.