Aokigahara Jukai (an ocean of trees) located near Mt. Fuji, about 2 hours drive from Tokyo, is designated as Fuji Hakone Izu National Park. It is a primitive forest with very high historical value.
“Fugaku Wind Cave” & Narusawa Ice Cave “is in this Aokigahara Jukai. These are natural monuments of a country that has existed for more than 1200 years.
The temperature in the cave is kept from 0 to 3 degrees throughout the year, so it can be cool even in summer. Ice is made in winter and can be seen without melting even in summer. The two caves are tunnel caves and are also famous as geologically valuable lava caves.
Narusawa Ice Cave is a pit and is not a well-maintained step but a step built of stones and damp. Besides, it is slippery and dangerous because it is moist. Instead of sandals or high heels, it is better to go with walkable shoes like sneakers. Also, be careful not to hit your head in the cave, as the lowest point is slightly lower at 91 cm of the lava tunnel.
The temperature in the caves is maintained from 0 to 3 degrees all year round, just like in a refrigerator for 15 minutes. There’s nothing like freezing and getting stuck, but if you’re worried it’s better to bring a thick coat. If you are concerned about getting dirty with the handrail, bring gloves etc.
Spring or summer is recommended when visiting. If it is summer season, you can see a fantastic landscape where the outside is midsummer and the bottom of the bedrock is an ice column. You can feel the mystery of nature. However, since it is a popular spot, congestion is expected during summer. Please be careful.
Natural ice in the cave is formed in winter and can be seen until early autumn. However, due to the weather and temperature in the cave, it is not possible to see ice all year round. Therefore, if you want to see natural ice, you will have the chance to see the spring most beautifully.

In a national park maintained properly

Aokigahara Jukai (the ocean of trees) which opens northwest of Mount Fuji. There is the walk course that even a beginner can walk in peace in a national park maintained properly. There are “Fugaku Fuketsu” (Wind Cave) and “Narusawa Hyoketsu” (Ice Cave) which are lava caves in the east and west of an ocean of trees.

The chill in the cave flows

To the entrance of “Wind Cave”, you go down the stairs. It will be wrapped in the air which felt cool suddenly, when it gets down from stairs as a half. The chill in the cave flows. Temperature of the caves is 0 degrees to 3 degrees throughout the year. Since the temperature in a cave is also low even in midsummer, so you should bring a coat and dresse near an entrance.

The round-trip time required about 15 minutes

“Wind Cave” and “Ice Cave” are the caves made by lava. About 1200 years ago, the lava which flowed in by the eruption of the mountain called “Nagao yama” which is flank volcano of Mt. Fuji became hard, and was formed.
Since it is made of not a rock but lava, it has a black color. “Wind Cave” is the tunnel cave of 201 meters in total extensions, and a maximum of 8.7 meters of height. The round-trip time required about 15 minutes.

Temperature is 0 to 3 degrees throughout the year

“Ice Cave” is pit annularity, and the total extension is 153 meters. There is the narrow passage in some places so as to be barely enough to go through the one. Temperature of the “Ice Cave” is also 0 degrees to 3 degrees throughout the year. It is a feeling entering in the refrigerator. Unlike “Wind Cave” which is long to a transverse direction, it goes down the stairs. If you get down, you will arrive to the deepest place in the “Ice Cave.”
There are many lump of ice there. It is said that natural ice was cut down in the cave and stored in this way a long time ago.

The icicle lighted up shines shiningly

If you follow a passage toward an exit, the icicle which is the highlight of “Ice Cave” will appear.
The icicle lighted up shines shiningly and is mysterious. More than 3000 tourists seem to come per day to see this icicle when highest. 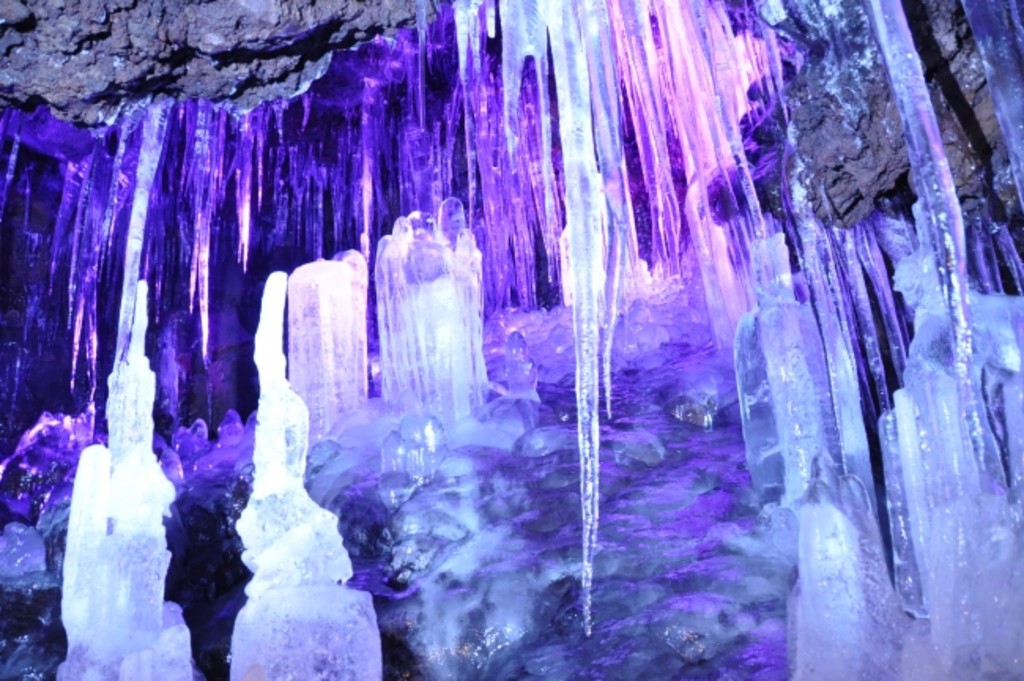